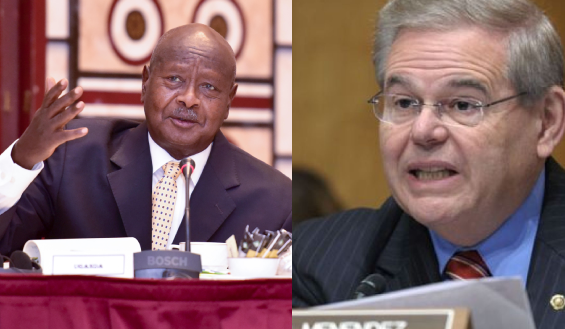 United States Senator Bob Menendez, a Ranking Member of the Senate Foreign Relations Committee, has promised to work with President Joe Biden to clearly demonstrate to President Yoweri Museveni that there will be consequences for subversion of democracy
Last week, The electoral commission declared Mr. Museveni the winner of 14th January presidential elections with 58.6 percent of the vote, to Wine’s 34.8 percent, came after the most violent election campaign in recent years, with the harassment of the opposition, media and deaths of scores of Wine’s supporters.


President Museveni said that the poll could be the “most cheating-free” in the history of the country.
However, Senator Bob Menendez In statement said the January 14th elections were yet another reminder that the Mr. Museveni regime has no interest in respecting the democratic aspirations of the Ugandan people.
“Sadly, Uganda’s pervasive harassment of opposition politicians, the obstruction of election observers, repeated abuses by security forces and internet blackouts, and allegations of vote rigging, have cast serious doubt on the credibility of the entire electoral process. At this juncture, I call on Ugandan authorities to cease their campaign of harassment against Uganda’s opposition and other independent voices, including leading Presidential contender Bobi Wine, who remains under house arrest.’’ He said

Bobi Wine remains under “house arrest”, his party said on Sunday. Bobi Wine has not left his home since he went out to vote in the election on Thursday, last week. He said he was under “siege” as soldiers and police surrounded his home, preventing anyone from entering or leaving.
“Our leader … is effectively under house arrest,” National Unity Platform spokesman Joel Ssenyonyi told a press conference, adding no one was being allowed access.


“Faced with fresh evidence that President Museveni has no intention of charting a new, democratic course for his country, the United States and its international partners must now respond. ‘’ Senator Bob Menendez said
He says the business-as-usual approach will not suffice.


also read: Presidential elections: UK asks Uganda govt. to investigate the concerns by ‘’many in Uganda & beyond’’

‘’Towards that end, I look forward to working with the incoming Biden administration to clearly and unequivocally demonstrate to the Museveni regime that there will be consequences for those that repeatedly engage in the willful subversion of democracy. The United States must stand with the Ugandan people as they pursue their democratic aspirations.”