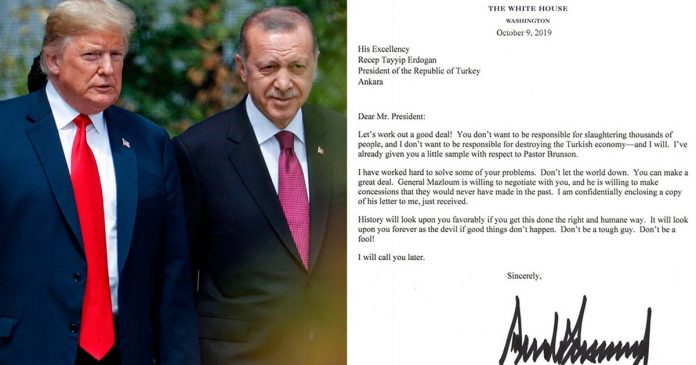 
“Don’t be a tough guy” and “Don’t be a fool!” Donald Trump warned his counterpart Recep Erdogan
Three days after appearing to greenlight an invasion by pulling US troops from the Kurdish-dominated region, Trump told the Turkish president he would wreck Ankara’s economy if the invasion went too far.


“History will look upon you favorably if you get this done the right and humane way,” Trump said. “It will look upon you forever as the devil if good things don’t happen.”
The US leader told Erdogan a “great deal” was possible if he negotiated with the head of the Kurdish-led Syrian Democratic Forces, Mazloum Abdi, whom Turkey has labelled a “terrorist” for his ties to the Kurdish PKK militants in Turkey.


Trump had the letter released to bolster his view that he did not give Turkey a green light to invade Syria. Many lawmakers have been sharply critical of his decision to remove American forces from the conflict zone.
“I have worked hard to solve some of your problems. Don’t let the world down. You can make a great deal,” said Trump in the letter.


The president wrote that the commander of the Kurdish-led Syrian Democratic Forces, General Mazloum Kobani Abdi, was willing to negotiate and to make some concessions.
“Don’t be a tough guy. Don’t be a fool,” he finished, adding: “I will call you later.”