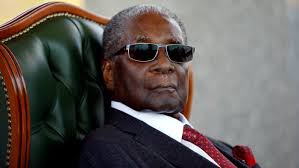 As public wakes for late Zimbabwean leader Robert Mugabe have drawn to a close, traditional chiefs are demanding the body be buried according to spiritual traditions.
Those requests have been part of a dispute over the final burial of Mugabe, who died September 6 almost two years after a coup ended his increasingly autocratic 37-year rule.


He died during a medical trip to Singapore aged 95, leaving Zimbabweans torn over the legacy of a man who some still laud for his role as a colonial-era liberation hero.
Mugabe’s burial has already been caught up in a dispute between his family — who wanted to bury him at his rural homestead Zvimba — and the government, which pushed for the body to rest at a national monument in the capital.
They finally agreed Mugabe would be buried at the National Heroes Acre monument, in about 30 days, once a mausoleum was built for him.

But Mugabe was a non-practising chief in his homestead, and the burial feud has highlighted the spiritual beliefs, superstitions and rituals surrounding deaths of traditional leaders in parts of Zimbabwe.
Once Mugabe’s remains were returned to Zvimba on Monday, traditional leaders demanded the burial remain in line with local rites.


“When a chief such as Mugabe dies, he is not a person that can be buried at Heroes Acre, that is forbidden. He should be buried in a cave,” Burombo told AFP.
“Mugabe was not just a president, but he was the embodiment of the spirit of Kaguvi,” he added, referring to one of Zimbabwe’s revered spirit mediums and pre-colonial nationalist leader.
When a chief died, often his body “would be dried”, his teeth “extracted” and his finger and toenails “ripped off”, Burombo said.


He said the body would then be wrapped in skin hides before burial, and could even be swapped with a token such as a goat’s head to be buried instead.
“You can build that monument, but it doesn’t mean that is where the remains of Mugabe will be buried… it’s just for people to continue remembering him.”

Mugabe grew up Catholic and was educated by Jesuits. But according to Burombo, he still followed “traditional norms and practices” despite “going to church”.