Home Politics The president who banned begging; men aged 18 & 55 who had... 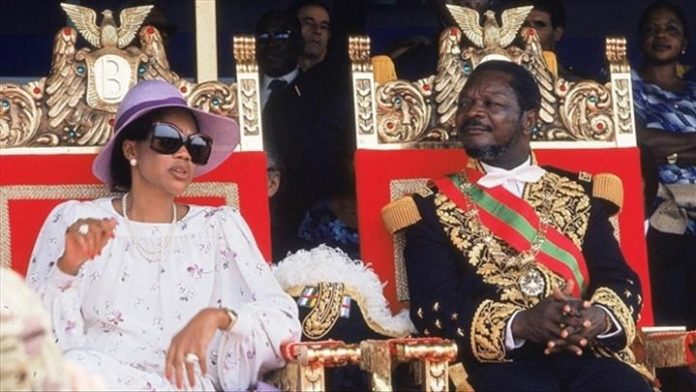 When he seized power in 1966, Jean-Bedel Bokassa dismissed dissolved the National Assembly.
The Central African political and military leader who served as the second president of the Central African Republic called National Assembly “a lifeless organ no longer representing the people.”
He introduced a law that men and women aged 18 to 55 had to prove they had jobs, or else they would be fined or imprisoned.


Described by some as One of Africa’s worst leaders ever, Bokassa also banned begging.
The Central African Republic’s President from 1966-1976 and Emperor from 1976-1979, is estimated to have fathered 54 children by various lovers, including Romanian, Tunisian, Gabonese, French, Vietnamese, and Belgian ladies.
“Having annulled the constitution, Bokassa made himself President, then President for Life in 1972, then Marshal of the Republic in 1974. In 1977 he decided to crown himself Emperor.
Other titles he went by include President for Life, Minister of Defence, Minister of Justice, Minister of Home Affairs, Minister of Agriculture, Minister of Health and Minister of Aviation.

Bokassa initially spearheaded a number of reforms in an effort to develop the Central African Republic. He sought to promote economic development with Operation Bokassa, a national economic plan that created huge nationalized farms and industries, but the plan was stymied by poor management.
He later became known for his autocratic and unpredictable policies, and his government was characterized by periodic reshuffles in which the power of the presidency was gradually increased.
Following the substantiation of international charges that Bokassa had personally participated in a massacre of 100 schoolchildren by his imperial guard, French paratroops carried out a military coup against him that reestablished the republic and reinstated Dacko as president (September 1979). Bokassa went into exile, first traveling to Côte d’Ivoire but later settling in France.


Bokassa was sentenced in absentia to death in 1980, but he inexplicably chose to return to the Central African Republic in 1986.
He was arrested and put on trial, and in 1987 he was found guilty of the murders of the schoolchildren and other crimes. His death sentence was subsequently commuted, and he was freed in 1993. He was posthumously pardoned in 2010, in conjunction with the country’s 50th anniversary celebration.