Home Lifestyle The 10th Parliament: Parasitic & predatory- a money sink hole to the... 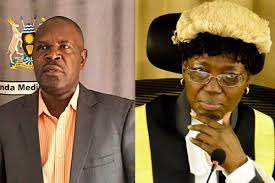 Parliament’s motion of displeasure has amounted to little more than window dressing.
This week, Hon Semujju Nganda the MP for Kiira Municipality moved a motion on the floor of Parliament in what was viewed as move to express anger towards the executive and judiciary that have exposed their winking hypocrisy in the wake of COVID-19 cash bonanza.


The motion which was unanimously supported by the house can also be viewed as a desperate and futile attempt to fix the image of Parliament that has been brutally dented by this scandal.
Watching shameless MPs engage in chorus tirade against the executive was a disturbing scene: an orgy that demonstrates how our Parliament has now become a theatre for petty politics and no amount good for nothing justifications will vindicate them from wrong doing. The more they defend the loot, the more they expose their skeletons that have been hang up and left to dry.
Still: any port in a storm, as they say. And the idea that the most significant criticism to the cash bonanza has come from sworn-in government apologists, should at the very least offer us pause for thought.
These are strange times, and so perhaps it’s was only least expected that such unholy alliances are going to be formed along the way.


Just take Ofwono Opondo himself as an example, who on his regular NBS frontline shows previous few weeks has been unapologetically opposed to the self appropriation of COVID-19 10billion fund, challenging it on – wait for it – ethical and moral grounds.
You know your cause is a very bad one and it’s only destined to catastrophic failure when a moral high hat like Ofwono Opondo starts lecturing you on moral rectitude.
Many times the Parliament of Uganda has of course been criticized for wrong doing in the past but it’s probably not overly accustomed to stinging criticism of this nature, scale and magnitude, and certainly coming from a seasoned government spin master who was recently justifying 29 millions given to MPS to pass age limit Amendment bill.
It’s important to note that Opondo’s protestation and those of the public to the Parliament’s cash bonanza is indictment to an institution that has sidestepped it’s mandate. The vitriol aimed at MPs as well as its Speaker, Hon Rebecca Kadaga, is vote of no confidence in an institution that has reduced itself to a rubber stamp of the executive. No amount of whitewashing will exenorate them from this absurd spectre.


This, in a way, is a stark reminder of the danger of surrendering Parliament’s independence and opening up so accommodatingly to the excesses of the executive. Partly, of course, it kills the very idea of separation of power and largely undermines their cardinal role of it’s very existence: providing checks and balances that make the crucial moving parts of government work.
The 10th Parliament has long sold itself on the basis of being anti-people, parasitic and predatory: a money sink hole to the nation. Perhaps, they’ve steadfastly ignored the elephant in the room: the ever-growing public mistrust and it’s image that has nosedived to disturbing levels.


Ofwono Opondo who is devoid of any scintilla of decency is now a knight of molarity. The angel of justice and a cool headed Hon Semujju Nganda is now a punching bag. Defending the image of Parliament- if there’s an image to speak of in the first place, is more important than a fight against COVID-19, MPs elephant-size egoes are more important than welfare of ordinary citizens stuck in quarantine. Welcome to the new orthodoxies of Ugandan politics.