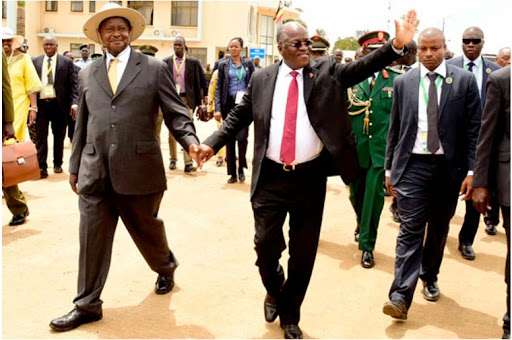 Tanzania’s ruling party on Saturday nominated President John Magufuli to seek re-election in October.
The unanimous decision by the Chama cha Mapinduzi party to back Magufuli came as no surprise.
The president, nicknamed ‘ The Bulldozer’ for his relentless work ethic and populist approach,, who was elected in 2015, has in his first term been accused of narrowing freedoms and increasing authoritarianism and seeking to cover up his country’s coronavirus epidemic.


Members of his ruling Chama Cha Mapinduzi (CCM) who were present at a national congress broadcast live from the administrative capital Dodoma voted for Magufuli, the only candidate seeking nomination.
Ruling party secretary-general Bashiru Ali told the gathering that the National Executive Committee nominated Magufuli because of his commitment to social and economic development and fighting corruption.
“I’m elected by all members of this meeting but let us not expect to win the general election by 100 percent. I thank you all for your endorsement but let’s work hard and sell our manifesto,” Magufuli told the meeting.

Magufuli came to power pledging to clamp down on corruption, but has increasingly come under fire for human rights abuses.
Tanzanians will elect the president, MPs and ward councillors during the general election, whose exact date has yet to be set.

I warmly congratulate my Brother @MagufuliJP for the trust that the CCM Parti has put on him to be the flag-bearer during the upcoming presidential elections. Wishing him the best of luck & looking forward to working with him to strengthen our existing very good relations.


The Unites Stated last month accused Tanzania of seeking to “stifle democratic norms” ahead of general elections, after the arrests of opposition members and the closure of a newspaper.


“These actions follow a disconcerting pattern of intimidation toward opposition members, civil society, and media outlets,” it said.
Former President Ali Hassan Mwinyi and members of the ruling party have urged Magufuli to try to stay in power after 2025 despite Tanzania’s two-term limit. But he has said he won’t seek an extension after two terms.