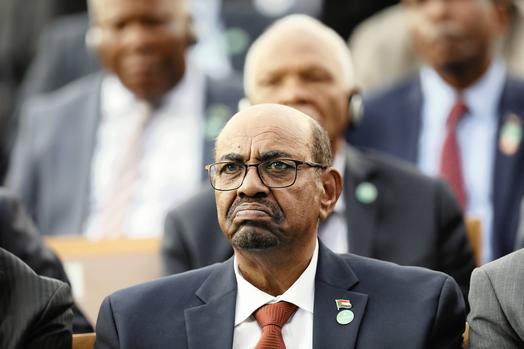 The style bears hallmark of military coup
There is speculation that a coup attempt could be under way against Sudan’s President Omar al-Bashir, following state media reporting that the army is to make an “important” announcement soon, Reuters news agency says.


On Wednesday night, protesters continued rallying outside the the defence ministry in the capital, Khartoum, to demand Mr Bashir’s resignation.
Several military vehicles entered the army compound in Sudan’s capital, Khartoum, in the early hours of this morning, AFP news agency is quoting unnamed witnesses as saying.

The compound houses the defence ministry, and the official residence of President Omar al-Bashir, AFP adds


Some Sudanese army officers have reportedly taken over the State Radio and Television buildings in Omdurman, with news of a military coup being underway currently. Patriotic songs are being played on air as the military is about to issue a statement, reports @AJArabic and @skynewsarabia

The Sudanese military Chiefs are currently meeting without President Omar al-Bashir. The Sudanese Presidential Palace has been surrounded by armed military forces.
President Bashir came to power in through a military coup on June 30, 1989 mastermindinded by islamists before breaking ranks with them and consolidating rule. He was preparing to amend constitution to run new term


International support for the protests has been relatively slow to materialize although the so-called “troika” countries — the UK, US and Norway — issued a statement on Tuesday backing demonstrations for the first time.
“The time has come for the Sudanese authorities to respond to these popular demands in a serious way,” the trio of Western diplomatic players said.


In February, the troika had already condemned the imposition of a yearlong state of emergency in Sudan. Sudan’s Foreign Ministry responded by saying they trio’s statement represented “a gross interference in Sudan’s private affairs.”
Reeve said the statement didn’t go far enough.