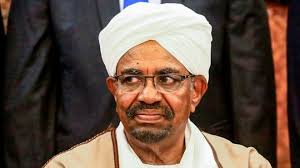 Sudan’s transitional government has banned former ruling National Congress Party (NCP) of deposed president Omar al-Bashir.
Bashir was toppled and imprisoned in April this year.
On Thursday evening, the co-ruling Sovereign Council and government Cabinet approved the dissolution of the NCP and repealed a public order law that had been used to regulate the behavior of women under the Islamist Bashir.


Government says the NCP has been dissolved in accordance with the law.
The two measures are in response to key demands by pro-democracy campaigners
Under Bashir, the laws were deployed to impose conservative Islamic social codes, restricting women’s freedom of dress, movement, association, work and study.

This could include preventing women from wearing trousers or leaving their hair uncovered in public, or mixing with men other than their husbands or an immediate relative
The Sudanese Professionals Association (SPA), which spearheaded the campaign to oust Bashir, said they were “an important step on the path to building a democratic civilian state”.


Yosra Fuad, a women’s rights activist in Khartoum and veteran campaigner against the public order laws, said the move to abrogate the public order laws was “a success for the women’s rights movement and for everyone in Sudan.-the Guardian reported.
Those found to have contravened the law could be punished with flogging. The prime minister, Abdalla Hamdok, called the rules “an instrument of exploitation, humiliation, violation, aggression on the rights of citizens”.


The law to dissolve Bashir’s National Congress party (NCP) also allows for the party’s assets to be seized, said the justice minister, Nasredeen Abdulbari. State TV described it as a measure to “dismantle” the former regime.
The law’s text was posted on Twitter by the Sudanese Congress Party, a member of the FFC. The text stipulates: “The National Congress Party shall be dissolved and its legal personality shall expire and shall be removed from the registry of political parties and organizations in Sudan.”


Properties and funds owned by the NCP or associated groups shall be seized and transferred to the finance ministry, it said.


The NCP was founded in 1992 and ruled until Bashir left power. Heavily influenced by the Muslim Brotherhood Islamist movement, the party promoted the imposition of a rigorous interpretation of Islamic law in Sudan.
The information minister, Faisal Mohamed Saleh, said the law was intended to “establish a new era”.