Eco-Bank Uganda brand visibility is slowly and gradually disappearing and the owners have all the reasons to worry. The bank that launched in Uganda six years ago is yet to break even. The West African bank has been posting losses since it opened her doors in Uganda.

The latest, the bank has closed several of her off-site ATM’s which were only opened last year. Sources within Eco bank told Newz Post the closed ATM’s were performing way below the minimum expected performance. The bank is expected to save more than Ugx. 50m monthly as result of closing some ATMs.

Also read: How a local bank lost millions of shillings to fraud

Reports suggest the Eco bank ATM’s that were closed, including the one of Bweyoyerere and Nakawa, we’re doing less than 1,500 transactions a month. Analysts blame it on location. Besides, the ATM was located away from the Bweyogerere town. 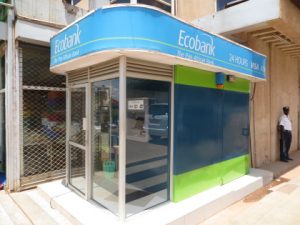 Unlike Kireka, Bweyogerere, is classified as a low-end town. No wonder in Kireka the big boys-Stanbic, Barclays, Centenary, Crane Bank have branches. While Standard Chartered and Housing Finance bank have ATMs.

For an off-site ATM to record fewer than 1,000, that is a miserable performance considering the costs involved in maintaining an ATM: rent of about (Ugx. 2m for month) internet costs, security among others.

While you can urge that closing ATM’s is ‘normal’ for a loss making institution like Eco Bank it is supposed to be a different story. One would think a thorough research is carried out before a decision is taken to open a branch or set up an ATM. This seems not to be the case with Eco Bank Uganda.

While we could not establish corruption tendencies in setting up Eco Bank ATM’s, However corruption is an industry practice.

Bank officials collude with landlords to set up ATM’s in their premises in return for a kickback off the monthly rent the bank pays. That is why some ATM’s are set up in not so busy places, simply because corrupt bank officials expect something from the landlords every month.

It costs more than Ugx. 200m to set up an ATM. The figure includes hardware and software. Thus closing several ATM’s at ago is such a huge loss to Eco bank.

Eco bank, which boasts of ten branches with headquarters in West Africa, has experienced challenges operating in the local market, and appears to lack a consistent strategy and market niche.

So what is the problem with Eco Bank Uganda?

Just like UBA, the bank’s top honcho have been unstable with several changes in the senior positions at the bank on a frequent basis – -a sign of some disorganization.

Eco bank problems remain largely the same. Add on bureaucracy, since most decisions are taken from head offices in West Africa. Such business models cannot work in a market that is very competitive and already saturated.

For example Eco-bank has Visa card. However, customers have to wait for a whole month to get it, simply because it’s printed in Togo. On the other hand Competition offer theirs in just hours. A case of Stanbic Bank.

Eco Bank top management in Togo seems to have got it wrong-the bank continues to appoint foreigners as managing directors. They have as a result paid the price. Kenyan based banks have noticed this weakness and are slowly adopting. For example KCB recently appointed Aga Ssekalala Junior as her board Chairman, while Equity Bank Uganda has appointed a Ugandan as their managing director.

Eco Bank seems to mistrust in the locals. However, it is clear; Ugandans prefer to do business with people they know. Ordinarily, people with ‘big’ money whose sources they can’t explain prefer (a case of Pension money scam or Katosi road money) to bank it through others, with knowledge of bank MD. It becomes difficult to discuss such deals with someone you don’t know (a foreign bank MD).  The current ECO bank Uganda CEO comes from Ghana.

The bank seems to be lacking focus and a clear, consistent strategy. While the bank is supposed to target Small and Medium enterprises (SMEs), this is not reflected in the bank’s action plans.

In Ntinda, the home of the middle class and SMEs, Eco bank chose to instead set up an ATM as opposed to a branch. At least 10- of 26 commercial banks in Uganda (including market leaders Stanbic, Crane Bank, Barclays, Centenary bank) have branches in Ntinda, an indication of the vibrancy of the town.

Eco bank went ahead to put an ATM in Bugema-Busika, a rural place. It is believed they were targeting Bugema University students and the 2,000 casual workers at Mayile states (these earn about Ugx. 60,000 per month). However, these people make one transaction a month- withdrawing all their money at the beginning of the month. Thus the ATM remains largely idle till beginning of the next month when salaries are paid. It is evident; the ATM could not break even.

The bank’s communication strategy does not come out very well. The bank is not visible in the market-they are neither off-line nor online. When did you last land on an Eco bank advert? Or read a story about Eco Bank in the media? Management has also failed to carry out meaningful CSR; this has kept the bank in the dark thus distancing itself from potential customers.

Of the four major sources of incomes for banks( interest income, fees and commission, investment in bonds and Treasury bills) interest income accounts for  60 percent of the bank revenues, with poor visibility, distribution, and marketing the bank is indirectly chasing away potential customers who would be bringing in the much needed deposits and revenue. For how long is Eco Bank going to do this? How will the bank survive? Analysts agree on one nothing is done immediately, Eco Bank Uganda will be left with one choice-To exit. 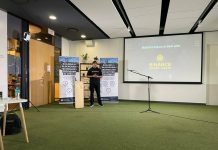