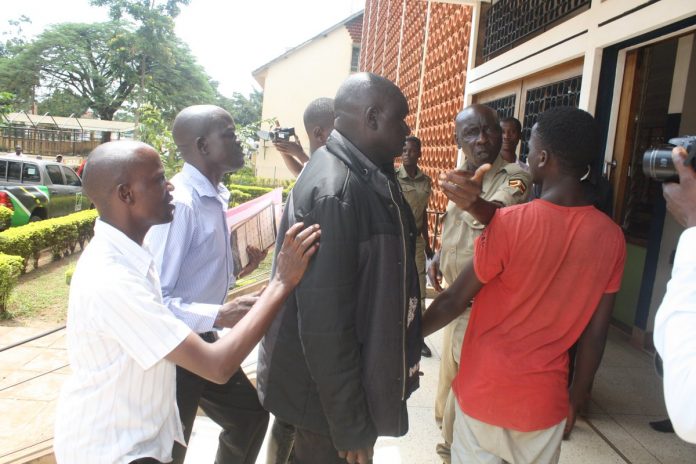 State House anti-corruption unit on Wednesday, following a tip off arrested a suspected trafficker in Mbale district.
Suspect was identified as Kuremo Steven. He appeared at the Magistrates court, charged and remanded.


The suspect allegedly trafficked Ms. Christine Nambireke who died in Oman under unclear circumstances.
Trafficking in persons remains a serious problem that requires greater multi-sector engagement.
According to, the 2019 U.S. Trafficking in Persons Report, Uganda remains a Tier 2 country. This means Uganda does not fully meet the minimum standards for the elimination of trafficking but is making significant efforts to do so

The report says, Uganda government made uneven anti-trafficking law enforcement efforts; however, convictions decreased and insufficient funding for witness protection, investigations, and prosecutions continued to hinder efforts.
The 2009 anti-trafficking act criminalized sex trafficking and labor trafficking, and prescribed punishments of up to 15 years’ imprisonment for offenses involving adult victims and up to life imprisonment for those involving child victims.
These penalties were sufficiently stringent and, with respect to sex trafficking, commensurate with those prescribed for other serious crimes, such as kidnapping. The law also criminalized the use of a child in any armed conflict and prescribed penalties of up to the death penalty.


Of the six convictions under the anti-trafficking law, the courts sentenced two traffickers to two years’ imprisonment, one to 14 months’ imprisonment, two to community service, and one to a fine. For traffickers convicted for fraudulent recruitment, one received three years’ imprisonment, one received one year, and two received warnings.
The majority of convicted traffickers did not receive sentences considered adequate to deter. This compared to 145 cases investigated, 52 cases prosecuted, and 24 suspects convicted in 2017. The media reported that the government arrested eight suspected traffickers for transporting vulnerable children from the Karamoja region into Kampala, but the government did not report prosecuting any traffickers who exploit these children in forced begging and child sex trafficking in brothels in Kampala, allowing traffickers of these children to continue with impunity.


Corruption and official complicity in trafficking crimes remained significant concerns, inhibiting law enforcement action during the year. The government reported investigating security officers at Malaba Border and Entebbe Airport as well as officials of the Civil Aviation Authority and Ground Handling Companies at Entebbe Airport for alleged involvement in trafficking crimes, but did not report further details on these cases.
A Ugandan diplomat and his spouse were reported in 2015 to have committed labor trafficking and related offenses; the couple has since departed the United States. The United States could not commence prosecution due to the diplomat’s immunity, nor did the government report taking any action during the reporting period to hold the diplomat and his spouse accountable.


The government did not report initiating investigations into media allegations from the previous reporting period that police officers were complicit in sex trafficking of child and female refugees. Additionally, the media continued to report that some of the labor recruitment companies suspected of involvement in trafficking were associated with, or partially owned by, high-level officials, which impeded law enforcement agencies’ ability to investigate their operations.


An NGO continued to report that some complicit immigration officers at border crossings facilitated passage of trafficking victims and several NGOs alleged that some senior police officials in Kampala protected traffickers from arrest and prosecution. The government did not report progress on prosecution of a case from 2014 involving the Commissioner from the Ministry of Finance charged with child trafficking; reportedly, the suspect continued to intimidate witnesses and use other tactics to delay the trial.


During the reporting period, the government established a trafficking-specific desk in the DPP’s office responsible for prosecuting trafficking crimes. The Ministry of Internal Affairs reported training 303 front-line officials on the anti-trafficking act and other laws related to illegal labor recruitment.