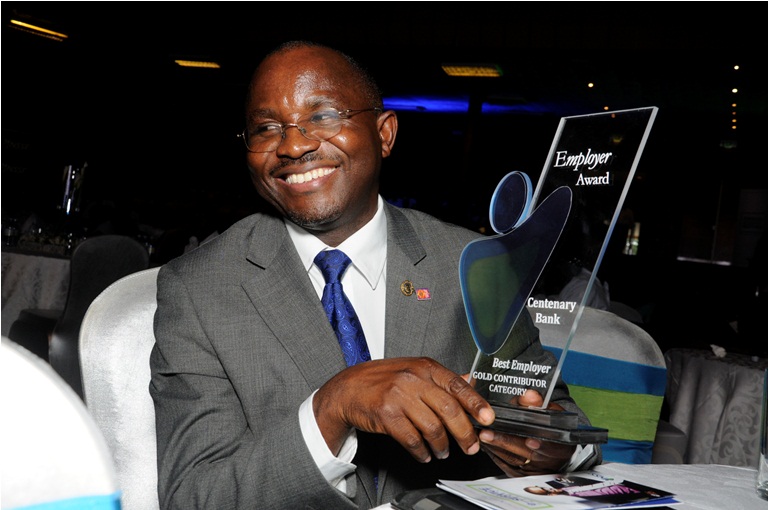 When a business is in a shock, the first person to explain is the Chief Executive Officer (CEO). He equally takes credit when the business excels, for he provides leadership, and support (moral and financial ) to the team. That is exactly what happened to Stanbic and Centenary Bank CEO’s.

The two banks had an outstanding performance in 2015. Stanbic Bank, for example, was the most profitable bank out of the 26 players in the country. The bank recorded a net profit of Ugx. 150.8 billion up from Ugx. 135.1 billion, a 12 percent year-on-year growth.

Revenues were up 8 percent to Ugx. 532 billion, from Ugx. 494 billion in 2014. This was the highest profit ever in Uganda’s banking sector.

For this exceptional performance, the Stanbic bank CEO, and the board members, middle and top managers smiled this time round in the bank.

Mr. Patrick Mweheire, the Stanbic Bank CEO reportedly received one percent of the net profit the bank recorded in 2015. While the Board members each received between Ugx. 80m and Ugx. 100m.

On the other hand, junior supervisors and middle level managers each was given between five and ten million for the work well done.

This exceptional performance saw the bank jump from number four in 2014 to become the second largest bank in Uganda after Stanbic Bank.

The bank’s top management was excited by this performance. As a token of appreciation, Mr. Fabian Kasi was reportedly awarded a Ugx. 200m as a bonus for the job well done.

Fabian Kasi was first appointed as CEO the Centenary bank in 2010. Since then, the bank has grown in customer base, total assets, customer deposits and profitability.

Mr. Fabian, who bags Ugx 60m a month is seen as a great asset at Centenary Bank that his contract which was supposed to expire in 2017 was supposedly renewed mid last year. Two years before could expire.

For their oversight role, the board members also received between Ugx. 60m and 100m each as a bonus. The other top managers like General Manager marketing walked away with Ugx. 30m.

Centenary Bank is an indigenous bank managed by indigenous managers. The Bank has 8 board members, including; Prof. John Ddumba Ssentamu as the Board Chairman, Dr. Simon M.S Kagagube who is the Executive Director.

The two CEO’s have a tough job ahead not only maintain the momentum but prove that the 2015 outstanding performance was not a one off.

Executive bankers have been tasked to ensure that at least 25 percent of the 900 clients allocated to each of them switch to digital banking.

The move seeks to cut on operational costs. The clients in this segment are given special treatment, but they are charged Ugx. 40,000 every month for this service.

Will the two big brothers maintain their positions and performance this year? Only time will tell.