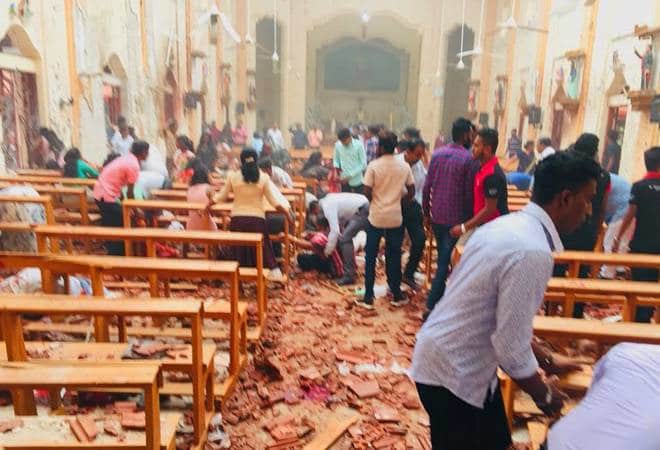 At least 207 people have been killed and 450 hurt in explosions at churches and hotels in Sri Lanka, police say.
At least eight blasts were reported. Three churches in Negombo, Batticaloa and Colombo’s Kochchikade district were targeted during Easter services.


The Shangri-La, Kingsbury, Cinnamon Grand and a fourth hotel, all in the capital Colombo, were also hit.
A national curfew has been put in place “until further notice” and social media networks have been temporarily blocked.
Reports say seven people have been arrested, but it not yet clear who is responsible for the attacks.
St Sebastian’s church in Negombo was severely damaged. Images on social media showed its inside, with a shattered ceiling and blood on the pews. Dozens of people are reported to have died there.


There were heavy casualties too at the site of the first blast in St Anthony’s, a hugely popular shrine in Kochchikade, a district of Colombo.
Among those killed in Colombo were at least nine foreign nationals, hospital sources told the BBC.
Hospital sources in Batticaloa said at least 27 people had died there.
A hotel official at the Cinnamon Grand, near the prime minister’s official residence, told AFP the explosion there had ripped through a restaurant, killing at least one person.

A seventh explosion was later reported at a hotel near the zoo in Dehiwala, southern Colombo, with police sources reporting two deaths. The zoo has been closed.
An eighth explosion was reported near the Colombo district of Dematagoda. Media say it was suicide bomber and that three people, believed to be security personnel, were killed during a police raid.
Local media report that security has been stepped up at the country’s main Bandaranaike International Airport.


Colombo resident Usman Ali told the BBC there were massive queues as he joined people trying to donate blood.
He said: “Everyone had just one intention and that was to help the victims of the blast, no matter what religion or race they may be. Each person was helping another out in filling forms.”
///BBC