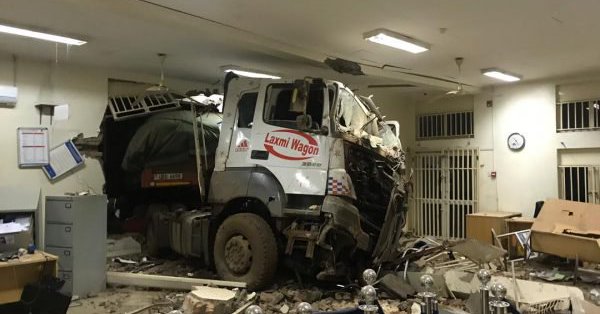 A speeding trailer truck registration number UBD 669H, carrying cement cement from Tororo district to Kampala lost control and rammed into building housing Centenary Bank in Bugiri located on Grant Street, along the Iganga-Tororo Highway town.
The accident which occurred at around 4.00am on Monday, destroyed the building and property. No deaths or injuries recorded.


The driver of the trailer truck has been arrested and being probed for drink-driving, speeding and reckless driving. There were no customers at the time of the incident
In a related incident, eight people died and nine others sustained injuries in a road accident that happened on Sunday in Nawantumbi village along the Jinja-Kamuli highway.

The accident involved a speeding and overloaded commuter taxi registration number UAZ 861J from Jinja whose one of its tyres burst before knocking a motorcycle carrying two passengers who died on spot.
The driver then lost control and knocked an electric pole, killing six passengers.


In another road accident, eight people died on the spot following a bus accident that occurred on Sunday morning at Nakawa, Busowa Town Council in Bugiri District along the Jinja-Tororo highway.

The accident that occurred at around 5.30am, involved a Kenyan bus belonging to Modern Coast that was travelling from Kenya and a trailer registration number ZE 2344 that was from Kampala.
The driver of the trailer reportedly lost control and veered to the right-hand side of the road where he collided with the bus. The driver and turn man of the trailer died on spot


The officer-in-charge of traffic at Bugiri Police Station, Hopkins Twesiga of the 40 passengers who were aboard the bus, six died while the survivors were taken to neighbouring hospitals