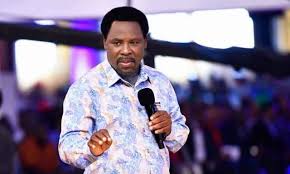 Popular Nigerian televangelist TB Joshua has led prayers for peace in the capital, Juba, in a mission backed by President Salva Kiir.
The self-proclaimed prophet said he had accepted President Kiir’s invitation to come and pray for peace and deliver a prophetic message to the nation.


“Time has come for us to overcome our divisions, for us to put aside behind us our differences. There is no more time f

or us. God wants to move the nation forward,” TB Joshua is quoted as saying by Radio Tamazuj.
The evangelist said that if there was peace, then the South Sudanese all over the world could return home and help develop their country.

“As I travelled the world I have discovered that people from South Sudan are all over the world. There is no country on this earth you will not find South Sudanese. They are intelligent, hard-working, ambitious people. Our leaders should overcome their divisions and allow them to come back to develop their fatherland.”
South Sudan erupted into civil war in 2013 shortly after it gained independence in 2011.
//BBC