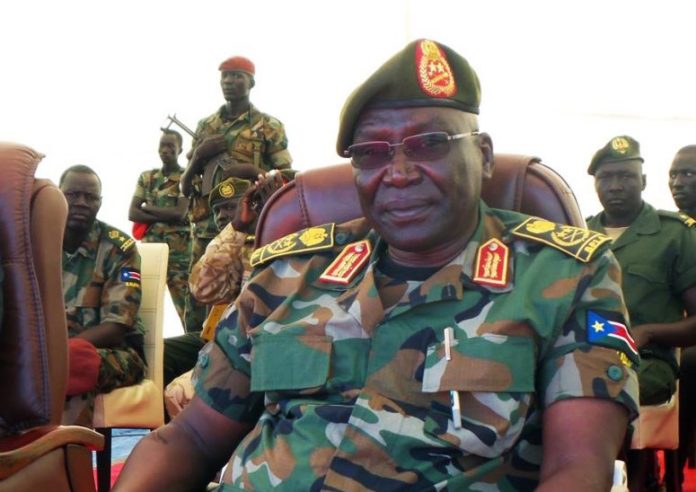 South Sudan’s capital Juba was tense on Saturday as more than 100 soldiers surrounded the residence of powerful former army chief Paul Malong in a bid to disarm his bodyguards.
Streets across the city were largely empty as people stayed at home for fear the standoff would erupt into clashes, an AFP correspondent said.


The deployment of troops around Malong’s residence in the central Hai Amarat neighbourhood where many government officials live was confirmed by presidential spokesman Ateny Wek Ateny.
He said it was a “routine operation” which should not cause any concern.
The move came five days after President Salva Kiir signed an order, a copy of which was obtained by AFP, authorising the arrest and disarming of Malong’s bodyguards and the removal of any other arms in his possession.
It also said any resistance “must be met with reasonable force”.

Malong, was sacked by Kiir in May, is a hardline ethnic nationalist who belongs to the president’s majority Dinka tribe.
He is widely regarded as being the mastermind of fighting that erupted in Juba in July 2016 that left hundreds of people dead and crushed hopes of a power-sharing government between Kiir and Riek Machar, his former deputy turned rebel chief, who is a member of the Nuer tribe.
– Visitors banned –
“I have not got out of my house since morning because… fighting may break out,” said Moses Alier, a resident of Hai Mouna in western Juba told AFP by phone.


Malong’s dismissal in May had sparked fears among residents that it could trigger clashes between his supporters and troops loyal to the president.
The general, who is currently under house arrest, was believed to be inside, sources close to the family said. Under terms of the October 30 order, Malong must not be allowed to leave his residence “at any time” and all visitors have been banned.


In September, Washington imposed sanctions on three senior South Sudan officials on charges of fomenting and profiting from the four-year civil war, including Malong and the information minister.
Source: AFP