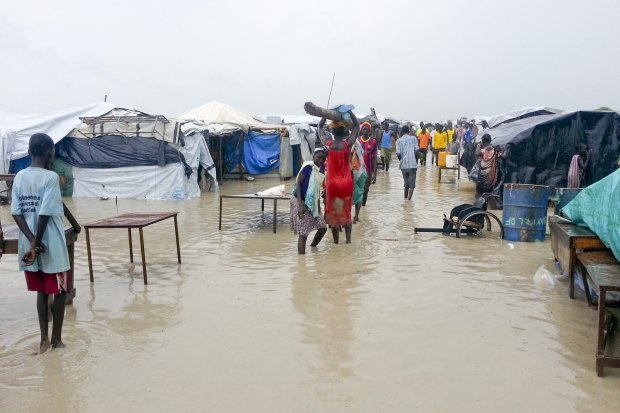 When the floodwater levels started rising in her village, 21-year-old Nyabeel* and her husband were torn about what to do. Leaving their land, which they relied on for food, was a tough decision. “We spent three days moving. It was challenging, with four children and a herd of goats,” she says.
Eight months on since flooding began, people in Unity State, northern South Sudan, continue to suffer, stuck in poor living conditions and at risk of outbreaks of infectious and waterborne diseases. Spread across several makeshift campsites, they face food insecurity, a loss of income, malnutrition, and a lack of safe drinking water. An estimated 835,000 people have been affected.


Initial FAO studies suggest about 65,000 hectares of cultivated land have been damaged due to floods, while over 800,000 livestock died across eight of South Sudan’s 10 states. Having lost so much of their cattle, many displaced women are resorting to collecting firewood to make an income. Increases in food commodity prices are making it more difficult for displaced people to get food, however.
With an 80 per cent increase in admissions to the Inpatient Therapeutic Feeding Centre (ITFC), MSF has opened a third ITFC ward at its hospital in Bentiu IDP camp. MSF teams are also running mobile clinics that visit camps in and around Mayom region, Bentiu and Rubkona, responding to malaria, malnutrition and acute watery diarrhea.
For most of those displaced, it’s become almost impossible to find safe drinking water. “Our only source of water for drinking, cooking and washing is the floodwater,” says Nyapal, a mother of four.
Before the flooding around Bentiu, sanitation facilities in the IDP camp were already in a critical condition and rarely maintained. “For a while, flooding meant it was impossible to access the waste treatment ponds. This led to an accumulation of sewage in the camp latrines, which then overflowed into the open sewer canals, where children frequently play,” says Cawo Yassin Ali, water and sanitation team leader in MSF’s emergency team deployed for the flood response. To reduce the risk of outbreaks, MSF has set up a sewage treatment plant inside the camp to contain and treat fecal waste.
With the water levels slowly starting to recede around Bentiu, it’s still not clear when Nyabeel, Nyapal and thousands of other displaced people will be able to return home. “We don’t have anything here, we came empty-handed, the village is covered with water, and we don’t know when it will dry,” says Nyabeel.

Until people can return home, they will be forced to continue living in such precarious conditions. This poses an added challenge for humanitarian actors, requiring them to not lose sight of responding to immediate needs while recognizing the protracted nature of this crisis and meeting corresponding standards beyond the initial emergency threshold.
“There are immense needs, including the need for proper shelters, clean water and sanitation infrastructure, quality health care, food security and livelihood support. Humanitarian actors, donors and the South Sudanese Government need to act now before it is too late. They cannot afford to wait any longer,” says Dr Eshaghian.