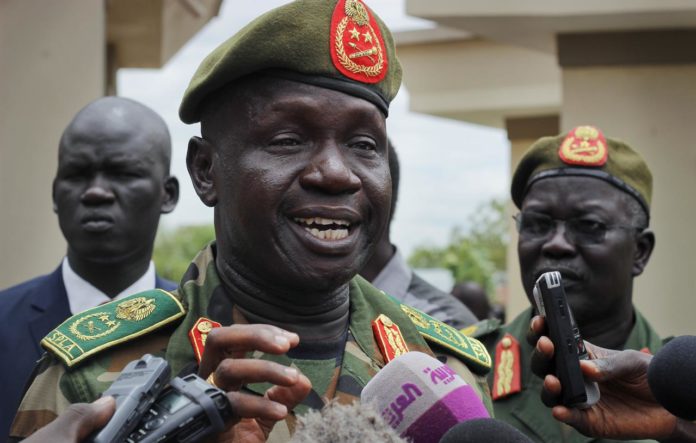 
Mr Gordon Buay, South Sudan deputy ambassador to United States claimed that the former chief of general staff , General Malong expressed displeasure on President Kiir’s administration.
He said the defiant General Malong has also pressed the ruling SPLM party to hold elections and elect a new chairman to lead the party, with him (Malong) positioning himself for the post.

Gen Malong made the remark on Friday while meeting the group of Dinka Elders sent from Juba to Nairobi to mediate between him and Kiir after government declared him a rebel last Monday.
“President Kiir Mayardit must announce his peaceful retirement, and assurances that there would be election of SPLM party without him
(Kiir) as a candidate,” the diplomat said via his Facebook account.


“SPLM party election must go ahead using secret ballot vote and the elected chairman must not be the interim President of South Sudan,” Mr Buay quoted Malong said.
The diplomat further added that Gen Malong demanded the removal of the National Security Service (NSS) Director General, Mr Akol Koor Kuc, accusing him of masterminding the arrest of his loyalists in the capital and the release of soldiers arrested in connection to his movement.


Malong, who became the army chief in 2014, has loyal troops in the army including the Dinka militia, Mathiang Anyoor, which has a presence in Juba and across the country. The militia can be mobilised to foment trouble against President Kiir.
Gen Malong is a former close ally of President Kiir. He was credited with keeping the president in power when the civil war broke out in 2013.


He claims that individuals close to President Kiir are spreading propaganda aimed at putting a wedge between him and the president, with a view to having him killed.
///the East African