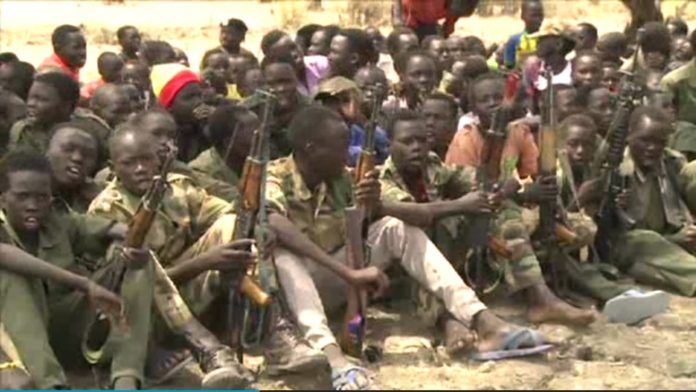 
More than 300 child soldiers have been released in South Sudan’s war-torn region of Yambio under a programme to help reintegrate them into society, the UN said on Wednesday.


Of the 311 children freed by armed groups, 87 are girls, the United Nations Mission in South Sudan (UNMISS) said.
“This is the first time so many young women have been involved in a release like this in South Sudan,” said David Shearer, the UN’s secretary general’s special representative and head of UNMISS.


“They will have endured suffering, including sexual abuse. It is vital that they receive the support they need to rejoin their communities and that they are welcomed home by family and friends without any sense of stigma,” he said in a statement.
The integration programme in Yambio, which is located in the south of the country, aims at helping 700 child soldiers return to normal life. Of these, 563 are part of Kiir’s force and 137 are with the rebels.


The UN peacekeeping force, acting in unison with the UN children’s agency UNICEF, is negotiating for the release of child soldiers in other regions, particularly in the east and north of the country.

South Sudan gained independence from Sudan in 2011, the result of a 2005 agreement that brought the curtain down on Africa’s longest-running civil war.
But little more than two years later, conflict erupted again when President Salva Kiir accused his former deputy and political rival Riek Machar of planning a coup. The war has caused tens of thousands of deaths, uprooted nearly four million people — roughly a third of the population — and triggered sporadic outbreaks of famine.