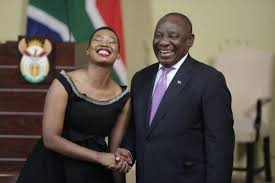 South African President Cyril Ramaphosa on Wednesday suspended one of his top ministers for two months without pay, after she was photographed having lunch with a friend in violation of a national lockdown to contain the coronavirus.
Recently, the president ordered South Africans to stay home for three weeks with few exceptions, such as buying food or medicine.


Minister of Communications and Digital Technologies Stella Ndabeni-Abrahams was summoned to explain herself on Tuesday after Mduduzi Manana, a former deputy minister, posted a picture of the pair dining together with his family on social media.
The President said: “The nation-wide lockdown calls for absolute compliance on the part of all South Africans. Members of the National Executive carry a special responsibility in setting an example to South Africans, who are having to make great sacrifices.’’ He said

He added: None of us – not least a member of the National Executive – should undermine our national effort to save lives in this very serious situation. I am satisfied that Minister Ndabeni-Abrahams appreciates the seriousness of what she has done and that no-one is above the law
South Africa’s police and army have been charged with enforcing the rules of the lockdown, which has been punctuated by arrests and allegations of violence by authorities. Whether Ndabeni-Abrahams should be charged with a crime is a matter for the law, the Presidency said.


If prosecuted, she could face a fine of 1,500 rand ($82) about Ugx. 303,400.
The President reprimanded the Minister & directed her to deliver a public apology to the nation.


“I regret the incident and I am deeply sorry for my actions,” Ndabeni-Abrahams said. “I hope the President and South Africans will find it in their hearts to forgive me.”