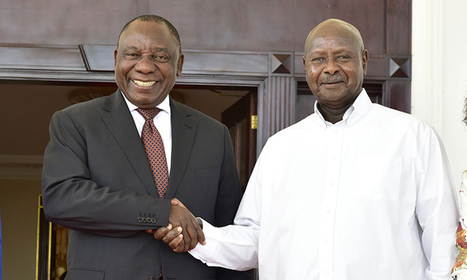 South Africa’s small and medium-sized businesses will have five years to repay loans taken out under a government scheme to help cope with the coronavirus crisis, the treasury said on Tuesday, announcing keenly-awaited details of the plan.
“The loan guarantee scheme is an initiative to provide loans, guaranteed by government, to businesses with an annual turnover of less than $16.5 million to meet some of their operational expenses. Funds borrowed through this scheme can be used for operational expenses such as salaries, rent, and lease agreements, contracts with suppliers, etc.,” Treasury, South African Reserve Bank (SARB), and Basa said in a joint statement.


President Cyril Ramaphosa announced the scheme, which involves bank loans guaranteed by the state, in April to help businesses with annual turnover of less than 300 million rand ($16.5 million).
“The loan amount will be disbursed to the customer in up to three monthly installments,” the treasury said in a statement, adding banks would carry out due diligence on borrowers.
The companies will not have to pay anything back to the banks for the first three months and will then have five years to pay off the loan and interest, it said.

The interest rate will be the repo rate of the South African Reserve Bank (SARB) plus 3.5%, so currently 7.75%.
Many of South Africa’s small and medium-sized firms were thrown into disarray when the government introduced a lockdown at the end of March to try to contain the coronavirus pandemic, as they lost much of their revenue but still faced fixed costs.
Most have now been allowed to operate with 50% of their workforce under partially eased restrictions, but many have warned it will take months to return to normal as supply chains have been disrupted and demand remains weak.
The loan guarantee scheme is part of a 500 billion rand package announced by Ramaphosa to try to stave off an economic crisis in Africa’s most industrialised country, which was already in recession before the coronavirus reached its shores.-Reuters reported.


He said in April the scheme would support more than 700,000 firms employing a total of around three million people.
The treasury has provided a guarantee of 100 billion rand for the scheme and will increase it to 200 billion rand if necessary and if the scheme is deemed successful,” the statement said