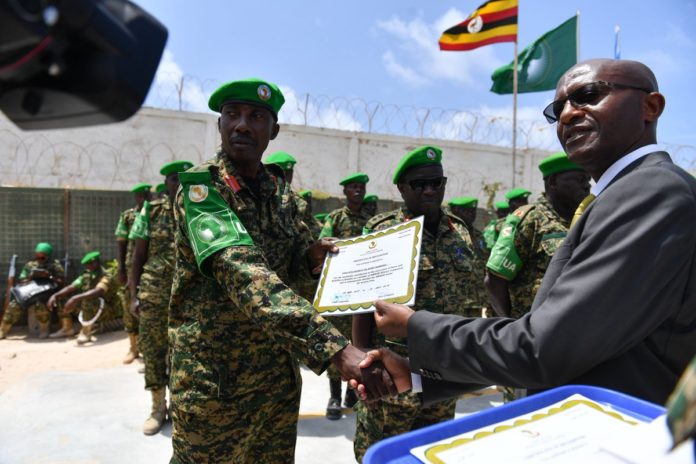 The African Union has awarded service medals to a contingent of troops from the Uganda People’s Defence Forces (UPDF), in recognition of their role in furthering the mandate of AMISOM in Somalia.
The troops from UPDF Battle Group XXII (UGABAG XXII) have completed a year’s tour of duty in the Horn of Africa country.


Deployed in August 2017, the outgoing battle group has been conducting anti-insurgent operations against Al-Shabaab in the Lower Shabelle region that include areas of Celjaale, Ayub, KM50, KM67, Buffor, Shalambot, Marka, Masla and Quoryoley.
The group will be replaced by Battle Group XXV (UGABAG XXV), which will assume security responsibility of the same areas.

“Go back and exhibit the expertise. Show the discipline and I wish you well,” AMISOM Force Commander, Lt. Gen. Jim Beesigye Owoyesigire, told the soldiers during the medal awards and send-off ceremony.
The Force Commander commended the soldiers for exhibiting discipline in the course of duty, sentiments echoed by Brig. Paul Lokech, the Commander of the Ugandan contingent in Somalia.


“One of the pillars in our doctrine which you know very well, is about pan-Africanism. And that’s the agenda that drew us into this mission. We have no other interest beyond this. The main focus of our coming to Somalia is to help the Somalis get back to where they were some 30 years ago,” Brig. Lokech added.


Present at the ceremony was the Deputy Ambassador of Uganda to Somalia Maj. Gen. Nathan Mugisha, who asked the outgoing commanders to document lessons learnt during their tour of duty, in order to inform the Mission’s leadership during transition period.
He further expressed gratitude to AMISOM and the United Nations Support Office in Somalia (UNSOS), for the support they extended to the officers, which expedited their contribution to