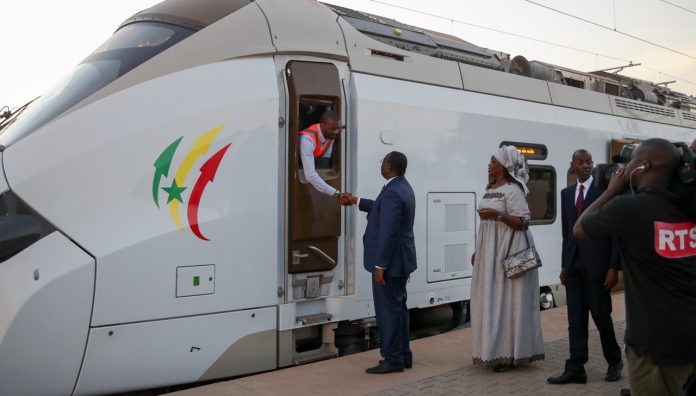 The daily one-hour commute between the densely populated Senegalese capital and the new suburb of Diamniadio, will soon be cut in half when the new Regional Express Train (TER) comes into service.
At an official ceremony for the handover of the first coaches for the railway on Monday, Senegalese President Macky Sall remarked that: “This is the first railway project in an independent Senegal after the Dakar-Rufisque line was built in 1883.”


The TER route will link Dakar with Blaise Diagne International Airport, via the new rapidly developing business centre of Diamniadio.
” Every carriage in this dual-mode electro-diesel train has air-conditioning and Wi-Fi. The people of Senegal deserve to travel in comfort and safety, and to save both time and money,” Sall said.
According to the President of the African Development Bank, Akinwumi Adesina, “This outstanding and transformative railway project makes Senegal a pioneer in the development of modern high-speed urban transport systems in West Africa.”

Senegal is the second country in West Africa, after Nigeria, to adopt a dual-mode (electric and diesel) mass rail transit system. When the Regional Express Railway becomes fully operational, it will take just 35 minutes to travel from Dakar to Diamniadio, half the time the 55-kilometer road trip currently takes during peak traffic hours.
With a population of approximately three million, Dakar is home to 25% of Senegal’s total population. An efficient, safe and fast mass transit system, is a strategic response to the development challenges of the Senegalese capital.


Speaking at the event, French Secretary of State in the Ministry of European and Foreign Affairs, Jean-Baptiste Lemoyne, said: “Senegal is a model of emergence. With this train link, you have shown that ‘impossible’ is not in the Senegalese vocabulary. What the people of Senegal have now, is an advanced Regional Express Train that is on the cutting edge of technology.”