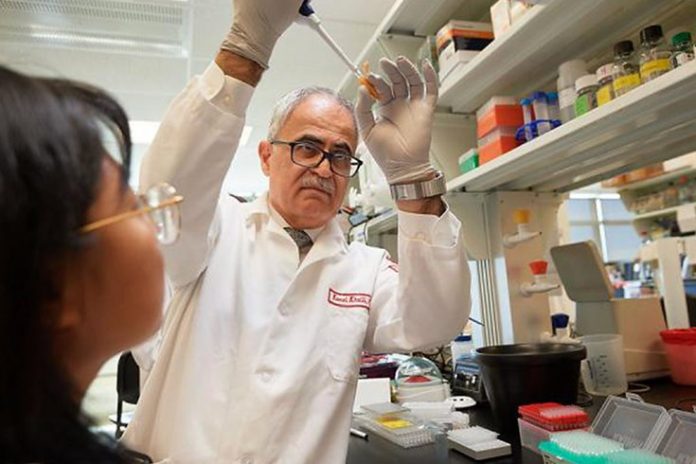 A cure for HIV has moved one step closer following the discovery of a ‘kill switch’ that stops infected cells reproducing.
In laboratory tests on human cells, scientists found controlling a particular molecule can clear out dormant HIV reservoirs.


The team said they have been trying to find the switch for three decades, and now believe the findings could lead to a way to ‘eradicate’ AIDS.
Currently, people with HIV take life-long medication called antiretroviral therapy to keep the virus at bay. But a cure remains to be discovered.

The virus can reactivate if therapy is stopped, multiplying rapidly and raising the risk of the virus being transmitted to others or leading to AIDS.
An estimated 36.9million people are infected with HIV worldwide, figures suggest
Dr Tariq Rana, the author of the study, said: ‘This is one of the key switches that the HIV field has been searching for three decades to find.


‘The most exciting part of this discovery has not been seen before. [It suggests] we have a potential therapeutic target to eradicate HIV and AIDS.’
The team from The University of California San Diego focused on RNA molecules in the body, which are essential for the expression of genes and various biological roles in living organisms.
The team found the HIV-infected cells contained a long noncoding RNA (lncRNA). In general, lncRNAs help control which genes are turned ‘on’ or ‘off’ in a cell.


They genetically sequenced more than 1,100 lncRNA and found a particular type that was raised in people with HIV.
The US team dubbed this particular molecule HIV-1 Enhanced lncRNA – aptly nicknamed HEAL.
The HEAL gene appears to have emerged fairly recently, and it regulates HIV replication in immune cells.
In experiments, the researchers either silenced HEAL, or snipped it out of the genome of HIV-infected cells using a gene-editing tool called CRISPR-Cas9.


CRISPR is a relatively new tool scientists can use to cut DNA at a specific spot, permanently altering DNA and its coding.
In both cases, HIV didn’t come back after the antiretroviral therapy stopped.
Dr Rana said: ‘By genetically modifying a long noncoding RNA, we prevent HIV recurrence in T cells – a type of white blood cell – and immune cells microglia when antiretroviral treatment is removed.
‘Our results suggest that HEAL plays a critical role in HIV pathogenesis.


‘Further studies are needed to explain the mechanism that leads to HEAL expression after an individual is infected by HIV, but this finding could be exploited as a therapeutic target.’
Despite their excitement, the team are quick to add this is a very early test, and it hasn’t yet been carried out in animals, let alone humans.


Doctors in China revealed in March that a bone marrow transplant from one of these people had left a HIV patient in London free of the virus for 18 months.
And a third HIV-positive patient, known as the ‘Düsseldorf patient’, displayed no signs of being infectious four months after having the treatment.


The success came 12 years after Timothy Brown, the so-called Berlin patient, who underwent a similar transplant and came off his antiretroviral drugs.
But, although the cases brought fresh hopes, the method is currently considered too dangerous to be used widely.
///DailyMail