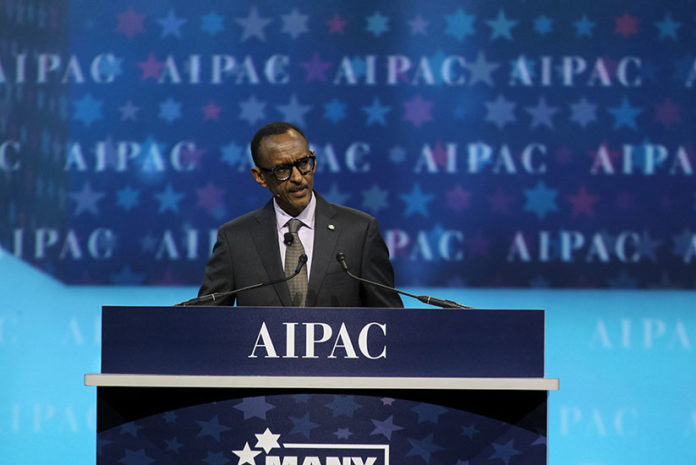 Speaking at the at the 2017 the American Israel Public Affairs Committee (AIPAC) Policy Conference, an annual pro-Israel gathering attracting over 18,000 community participants aiming at strengthening U.S.-Israel relations, President Kagame called for global solidarity against efforts to deny genocide and trivialise the victims, saying that security of once targeted people is beyond physical.


“The security of peoples who have once been targeted for extermination can never be exclusively physical. Until all ideologies which justify killing as a patriotic duty are defeated, our world is not truly safe. Not for us, not for anyone. “Together with friends like the United States, we must call for renewed global solidarity against the efforts to deny genocide and trivialise the victims.”
Read: Rwanda is strong and growing stronger- Kagame
President Kagame expressed solidarity with the State of Israel which continues to face eminent threats from some of its neighbouring countries, saying that the country has a right to exist and thrive as a full member of the international community.

Drawing similarities between the Rwanda and Israel, President Kagame said that Rwanda and Israel were proof that no tragedy was too great to get past:
“Rwanda is without question a friend of Israel. No tragedy is very great or so vast that human ingenuity and resilience cannot give rise to a better future. The survival and renewal of our two nations, testifies to this truth,”

Read: US to Paul Kagame- We are deeply disappointed
Speaking of Israel’s relations with the African continent, President Kagame said it was characterised by complementary capabilities and mutual interests:


“We are glad that Israel is engaging with Africa and that Africa is responding in a good way. Previously there has been absence of that and it has in a sense hurt the understanding that people should have about Israel and what it has gone through.”
President Kagame observed that Israel is in position to serve as a model on nation building having beat odds to thrive, given its hostile surroundings and unsympathetic international community.


“When you look at all this put together, it mirrors what we have been going through in the recent past. We think that there are lessons to be learnt that if people are determined, focused and it’s about their survival, there are not going to be limits of how far they can go to develop themselves.”
President Kagame is on record as the first African Head of State to address the conference.