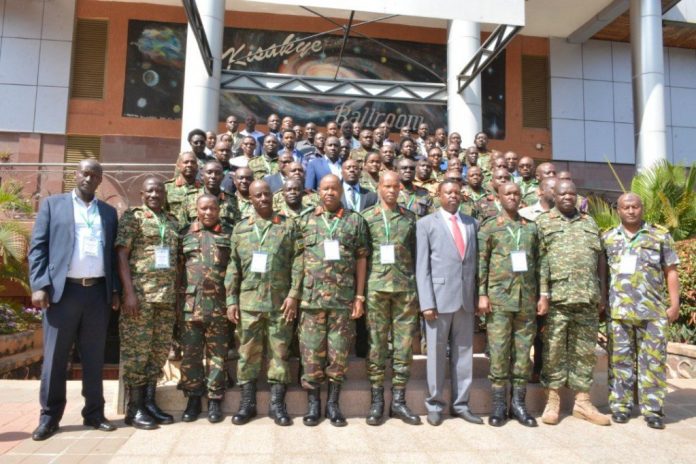 Representatives from the Military, Police, Prisons, civilian components and other stakeholders from all the six East Africa Community partner states are meeting at Silver Springs Hotel in Kampala to discuss modalities of conducting the 12th Edition Command Post Exercise codenamed Ushirikiano Imara 2019 in Uganda.

Brigadier James Kinalwa, the Chief of Recruitment and Training of the Uganda People’s Defence Forces confirmed Uganda’s readiness to conduct the exercise at UPDF’s Jinja cantonment at the Uganda Rapid Deployment Capability Center and Junior Staff College.
He noted that during the initial planning conference, the delegates inspected and approved the availability of facilities necessary for the conduct of the joint exercise.


According to the head of mission for the planning exercise, Dr. Omara Sam from Uganda Embassy in United Arab Emirates, the objectives of the exercise are, among others, to promote the EAC integration agenda, its awareness, interoperability of the EAC armed forces and to improve their readiness in responding to complex security challenges in the region.


Dr. Omara added that the exercise will cover four thematic areas: peace support operations, counter terrorism, counter piracy, and disaster management. Under disaster management, the conference underscored the need to give special attention to recurring challenges in the region such as Ebola epidemic.
The hosting of the CPX and Field Training Exercises is rotational among the EAC member states.