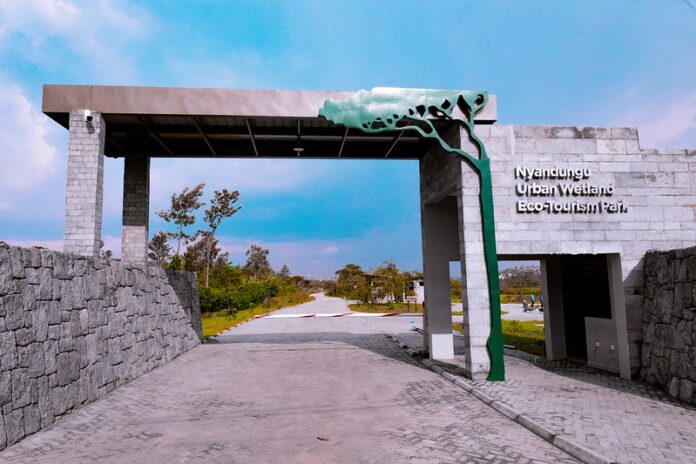 Rwanda’s Prime Minister, Dr Edouard Ngirente, on Monday unveiled a recreational center that was created after restoration of a degraded wetland area in the capital city of Kigali.

The Nyandungu Eco-Tourism Park, the first recreational center opened in Kigali, represents the value of restoring urban ecosystems, and will serve as a blueprint for other wetlands in Kigali and across the country, said Juliet Kabera, Director General of the Rwanda Environment Management Authority (REMA), at the launch event.

“The restoration of the wetland and creation of an eco-tourism park promoted the sustainable management of natural resources, and created approximately 4,000 green jobs mainly for women and young Rwandan,” she said.

The restoration of the wetland and creation of an eco-tourism park saw the planting of 17,000 trees made up of 55 indigenous species, representing the single largest addition to public green space in the city’s history.

The restoration of the wetland and creation of an eco-tourism park was funded by the Rwanda Green Fund (FONERWA) with support from the UK Government, the Italian Government through the Ministry for Ecological Transition and the Global Environment Facility through the UN Environment Programme.
The 121-hectare park features a medicinal garden, a Pope’s Garden, five catchment ponds, three recreation ponds, an information center as well as 10 km of walkways and bike lanes. It will be managed by a private firm QA Venue Solutions under an agreement reached with the government.

Kabera stressed the importance of urban wetlands in preventing flooding, addressing pollution and acting as habitats to unique biodiversity.

The eco-park includes 70 hectares of wetland and 50 hectares of forest and is home to more than 62 local plant species as well as more than 100 bird species.

“As we face the impacts of climate change, wetlands will be a key ally to protect lives and livelihoods. We look forward to working with our partners to replicate the success of restoring Nyandungu in other urban wetlands in Kigali and across the country,” Kabera said.

The eco-park provides a space for residents and visitors to the city to explore and learn from nature, and is part of Rwanda’s efforts to harness eco-tourism to restore biodiversity and conserve urban wetland ecosystems, REMA said in a statement.

The rapid growth of Kigali and the associated human activities have put significant pressure on the wetlands.
In 2016, Rwanda developed the Nyandungu restoration project to respond to the degradation and downstream flooding as well as increased pollution due to sewage outflows.

The restoration of Nyandungu wetland to an eco-tourism park demonstrates Rwanda’s commitment towards environmental protection, particularly for the conservation of wetland ecosystems as well as eco-tourism, said Zephanie Niyonkuru, deputy chief executive of the Rwanda Development Board.