Home Business Rwanda, Uganda Border re-opening: will it deliver permanent solution or it is... 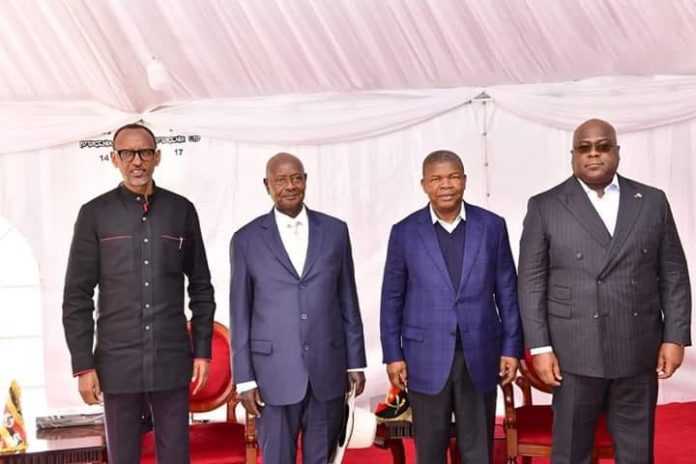 By Henry K. Otafiire/// Opinion
On July 27, 1985, an army brigade of the Ugandan army (UNLA), commanded by Brigadier Bazilio Olara-Okello, staged a coup d’état against President Milton Obote’s government, The nation was plunged into a political chaos and crisis.


Mr. Museveni one of the key players and his allies refused to share power with generals because he was convinced that the NRA had the capacity to achieve an outright military victory. The NRA merely used the negotiations infamously known as Nairobi peace jokes ostensibly to present a positive image to the world while reorganising his forces that overran the government of the day and eventually captured power.

Like wise in July 1992, at the height of the RPA war against the Rwandan government of President Habyarimana, RPF leaders Paul Kagame among others paid lip service to the peace process, quickly abandoned it and resumed fighting after having signed a cease-fire under the auscipes of Arusha Accords.


Now: does this strike you as a calibre of leaders that are going to be contained by the fine and meticulously crafted set of mere commitments and morally binding pronouncements scribbled in memorandum of understanding of the edition of Luanda Quadripartite Summit?
Do Presidents with a history of reneging on peace talks strike you as the sort that attach a high premium on diplomatic pacifying processes to situations like these?
Do Presidents cut out and shaped by similar schools of thought: Presidents who ascended to power through a protracted guerrilla movement– a guerrilla warfare that sought to unseat the governments of the day through a barrel of the gun not an election– strike you as the sort to settle disputes with humility and good grace?


These are the snippets that help us to understand our leaders’ thought processes of how their power and influence is acquired, reproduced, maintained and how the current border dispute, one that for all its clear economic and political consequences carries far more sinister personal overtones.
It is pointless to appreciate the dispute between Uganda and Rwanda without understanding the personalities and motivations of its leaders whose relationship is akin to one of a master and the apprentice. President Museveni has always viewed Kagame’s Rwanda as a satellite state- an extension of his unending adventurous military conquest in the great Lakes region.


On the other hand, President Kagame has refused the patronizing and condescending attitude of his once adorable king maker. And yet for all the obvious dichotomies between the two leaders, they seem to be united by certain attributes- desire for power, ego and ambition – perhaps there are more similarities between President Museveni and H.E Kagame than either would care to admit.
Both Leaders have shaped the destiny of their countries in their own image. Leaders whose stay in power has been largely facilitated by violence, purgation and shady cartels of military-prenuership in the Democratic Republic of Congo that saw two countries engage in full scale war in Kisangani campaigns.


Both are instinctively suspicious of each other. Perhaps, President Museveni’s impressive quality over President Kagame, is that he has bewitchingly impressive craft in delicately playing, manoeuvring and managing geo-politics with sophistication it deserves making Uganda appear as a cockpit of the regional diplomacy extending her diplomatic tentancles in the Great Lakes region and beyond.
The idea that a dispute which predates the time mediators from Angola and DRC have been in office is going to be midwifed by diplomats immaculately bedecked in Louis Vuitton suits is not only laughable but an exercise in posturing to cast an image that state disputes in this case between Uganda and Rwanda can amicably be resolved without recourse to war.


But in hindsight, it was perhaps inevitable that the two Presidents after a year of frosty relations would swallow their ego and come to the negotiating table to normalise and project pretentious image that geo-political problems require diplomatic solutions.
Friday’s meeting at Katuna –Gatuna border just like other previous meetings before, was an attempt to bury the hatchet and white wash their sins in a desperate attempt to fix their woes through soft power. It’s was like a PR exercise. And there is an irony at play here. Both leaders have been crusaders of East African Integration which calls for open borders, open markets to facilitate cross border trade of goods and movement of the people.


Yet they are seen as undermining and frustrating region’s hard-fought gains they have collectively achieved. This is how grand projects like East African Community integration will remain a pipe dream simply because of their naivety: a misleading belief that hegemony can be asserted by force alone, overlooking any sort of soft and diplomatic contingency plan in case of such a dispute.


While the both leaders have made it a priority to dominate the corridors of power in the great lakes region, they find themselves adrift: friendless and isolated, with only their ego and their hubris to protect. As we await the final talks of border reopening, am sceptical that they will deliver permanent solution.

It will be merely symbolic and an opportunity to save the face from the embarrassment of being labelled as war mongers and aggressors because something fundamental appears to be at the heart of the matter: a clash of ego, ambition and hegemony.