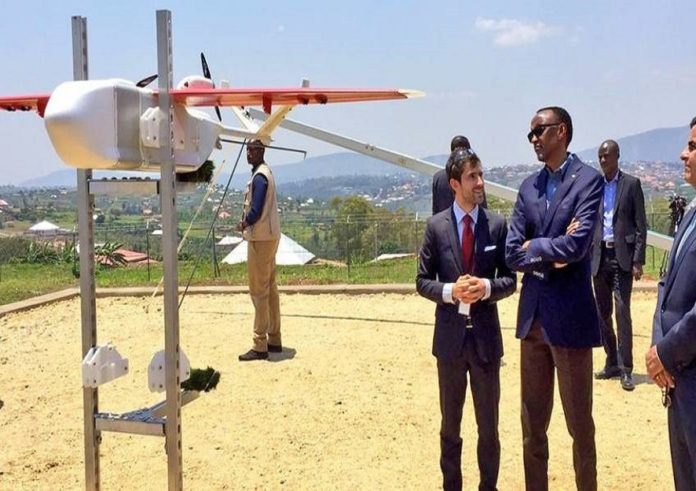 At this year’s World Economic Forum in Davos, Rwanda featured prominently for its drone technology, especially for its delivery of blood supplies to its rural areas.
The small East African nation was praised for being the first country in the world to adopt performance-based regulation for drones, which includes policies for safety, innovation and approvals.


Most would imagine that a small emerging land locked economy would have far more pressing priorities than drone technology, an element of the fourth industrial revolution which is still in concept phase in most developed countries, but they would be wrong.
The country is using it as an opportunity to address age old struggles, such as preventable deaths like postpartum bleeding.
Regulation, however, is not Rwanda’s first global milestone with drone technology. In October 2016, the country was the first in the world to commercially launch and use drones to deliver medical supplies.
To understand this development, one has to travel to Muhanga, a small town in Rwanda’s Southern Province, which hosts the country’s ‘drone port’.

On a cloudy Thursday afternoon in January, a remotely-piloted buzzing drone flies low above Ruhango District Hospital, in Muhanga, drops a red package on the lawn and takes to the skies again.
The hospital’s patients are not surprised by the low-flying drone; they are accustomed to such occurrences. A nurse rushes out of the nearby consultation waiting area, picks up the package and makes his way back to the patients.
Earlier in the day, another drone made a similar drop at Kabgayi Hospital, about 30 minutes away. This is how Rwanda’s remote healthcare facilities receive blood supplies in the southern and western parts of the hilly country.
Previously, the delivery of blood supplies from the central National Centre for Blood Transfusion to remote parts of the country took hours, holding up resources and medical staff, and at times forcing them to spend a night in Kigali.
Prior to drones, it took ambulances four hours to transport blood supplies from Kigali to Kabgayi Hospital by road. The ambulance would need to make this trip two to four times a week.


Apart from the difficulties of the road trip, laboratory technicians had to abandon their facilities and patients to process orders of blood supplies. With the adoption of drone technology by the Rwandan government, through a public-private partnership, the process now takes about 30 minutes.
READ MORE: Mind Blown By Drone At 160km/h
The innovative initiative was launched in October 2016, following an agreement between the Rwandan government and Zipline, a robotics company in California.
The partnership was one-of-a-kind. Across the world, drones are associated with bombing and spying. In Rwanda, however, drones were a sight for sore eyes as they came with much-needed medical supplies.


To many people, the two partners were underdogs. Zipline was a start-up firm and was yet to commercially roll out the concept, while Rwanda was not renowned for being a global innovation hub.
Keller Rinaudo, the CEO and Co-Founder of Zipline, says they were driven to succeed because of the millions of lives lost across the world due to preventable causes, like excessive blood loss.
While most countries adopted a wait and see attitude, Rwanda was willing to step up.
“Millions of women across the world die each year due to postpartum hemorrhaging (PPH). In fact, the United States has the highest rate of maternal death due to PPH in the industrialized world. It’s a major global problem. Rwanda was the first country in the world to step up and decide that they would tackle it with the most cutting-edge technology available,” says Rinaudo.


As the Rwandan government established regulatory framework to operate drones, Zipline gathered advice from everyone involved, including governmental departments, doctors, nurses, National Centre for Blood Transfusion officials, and laboratory technicians.
“The easy part was building the technology. The hard part was integrating with the national health system,” says Rinaudo.
As Zipline was building an ecosystem for drone technology, the state was looking at the safety and security concerns around the disruptive technology. This resulted in regulations such as seeking clearance from the Rwanda Civil Aviation Authority before taking off, registration of drones, and acquiring flying permits.
These regulations reduce the likelihood of drones being used for illegal activities or interfering with a plane’s flight path.


The hype around the innovative project attracted the attention of international corporations.
UPS, a global logistics firm, and Global Alliance for Vaccines and Immunization (GAVI), a public-private global health partnership, sought to be involved.
UPS, with an interest in using drones for their own deliveries, supported the initial launch with a grant of $800,000. GAVI was using the project to see if they could use the model elsewhere and improve healthcare across the world.
With a staff of about 50 and a fleet of 15 drones, Zipline has since made over 2,000 deliveries with over a quarter of them saving lives. The company is now looking to double the number of its drones as well as adding more advanced drones to its fleet.


“Our base in Rwanda has operated with 15 planes. We’re replacing those aircraft with the next generation and will soon begin flying 30 drones from each base we operate,” says Rinaudo.
This is welcome news for Rwandans, like Esperanza Ugirambabazi, who needed a transfusion when giving birth to her son at Kabgayi Hospital. In about 30 minutes, this was made possible because of one of the drones.
Another young mother from the same district tells of her months-old son who had malaria and urgently needed a blood transfusion. He is alive today because of the drone delivery.
The success of the project has led to a second phase starting in the eastern part of Rwanda, as well as demand for the service in other African countries.


“We’re in the process of setting up a second base in Rwanda to serve the rest of the country, bringing all 11 million citizens within a reach of this lifesaving technology. We’ll be expanding across Africa and the world this year. Zipline is building an instant delivery service for the planet,” Rinaudo says confidently.
Tanzania, with a neighbor of Rwanda, has expressed demand for the services. In 2017, the country announced that it would launch drone delivery services to provide medical supplies in the first quarter of 2018.
The Tanzanian Ministry of Health ambitiously intends to make up to 2,000 deliveries a day to over 1,000 facilities across the country, targeting about 10 million people. The country has already established regulatory framework for the technology.


For Rwanda, the success of the partnership with Zipline is just the start.
Rwanda’s Minister of Information Technology and Communication Jean de Dieu Rurangirwa says that the country is creating an enabling environment for further deployment of drone technology.
Beyond regulation, the government has been mulling plans to build capacity among emerging techies to increase the number of players in the sector.
“Building on the success of Zipline’s blood delivery technology, we are working to nurture a drone industry. As we look to the future, we will continue to put in place the infrastructure and policy frameworks that accelerate the adoption of emerging technologies to transform people’s lives,” says Rurangirwa.
“We are also establishing capacity-building programs to invest in local talent and leverage public-private partnerships to lay the groundwork for the Fourth Industrial Revolution.”


Already, other sectors have been working around incorporating the technology in their line of work.
In Musanze District, in the Northern Province, a pilot test phase is underway to introduce drone technology for potato crop monitoring, involving around 20 farming cooperatives. This will monitor for pests and diseases, which could boost crop harvests.
There are also conversations about introducing drones in the famous Akagera National Park to combat poaching.
With the new regulations in place, small businesses and entrepreneurs are finding ways to make the most of the technology. Local photographers, for example, are in the process of acquiring drones so their services can include aerial photography.


Renowned British architect Norman Foster is another who has been quick to take advantage. His firm, Foster + Partners, has expressed interest in building the world’s first drone port in the country.
Rwanda’s approach and progress in drone technology is seen as a model for other countries in the region.
“The government of Rwanda’s leadership in co-designing agile policy frameworks around the use of drones could be a model for other countries that want to accelerate adoption of this game-changing technology,” says Murat Sonmez, Head of the Center for the Fourth Industrial Revolution, based in San Francisco.
Rwanda may be a small country, but it’s taking giant strides.
Source: Forbes Africa