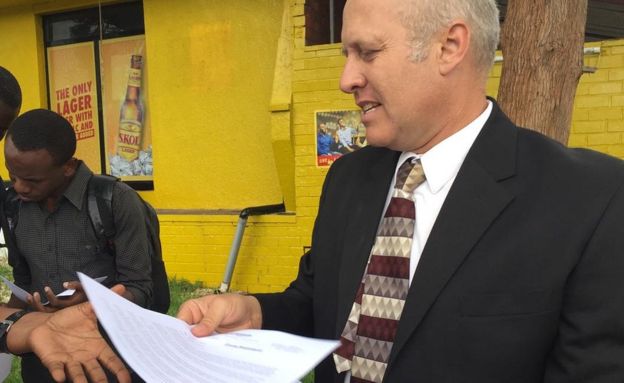 Rwanda said Tuesday that a controversial American missionary, who was arrested for calling an illegal public meeting with journalists, has been deported.
The Rev. Gregg Schoof is one of several outspoken evangelical pastors who have criticized the Rwandan government for allowing access to abortion and birth control, and for teaching evolution.


Gregg Schoof, a Baptist, has been operating in Rwanda since 2003, mainly through his church and a radio station, Amazing Grace FM, which was shut last year over a sermon calling women “evil” and “prostitutes”.
He was arrested on Monday, alongside his son, at the start of a press conference at which he planned to read out a statement slamming the government’s “heathen practices”.

Francois-Regis Gatarayiha, the Director General of Immigration and Emigration, told AFP the son — who was not named — was released, but that Schoof was deported on Monday night.
“Mr Schoof was deported back to America for two reasons. His work permit had expired. When he applied for renewal, we found that his purpose for staying in Rwanda was no longer valid because his church and radio were closed,” AFP reported.


He said that Schoof had been given a visa extension to prepare his departure from the country “on condition that he does not disturb public order. So what he did yesterday was in contravention of that condition and we decided to deport him.”
The immigration office said they expect him to make arrangements for his other family members in Rwanda to travel back to the US. Schoof’s church was among about 700 shut in February for “failing to comply with building regulations and for noise pollution.”


In a statement handed to journalists before his arrest he asked if authorities — by shutting his church — were trying to “smack God in the face … that is what devils do.”
“Is this government trying to send people to hell?” he asked, before slamming the teaching of evolution in schools, the handing out of condoms in schools, and the easing of restrictions on abortion.


The Rwandan government has been conducting a broad crackdown on the country’s religious institutions, closing thousands of churches and dozens of mosques, often accusing them of failing to comply with building safety standards. Many of the shuttered churches are small Pentecostal groups that meet in tents or flimsy buildings, and some preach a brand of so-called prosperity gospel that encourages worshipers to donate beyond their means.