Home Politics Ruhaama elders give Museveni a spear and shield; beg him to contest... 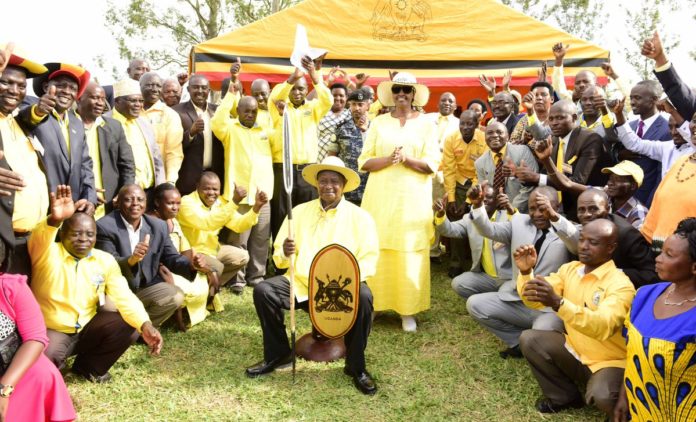 
The President was on Monday speaking at Kahiija Primary School playground of Kabingo Parish in Nyakyera Sub-County, Ruhaama County in the district of Ntungamo during the NRM victory celebrations following the winning of Ruhaama Constituency by NRM’s Kahima Moses Mugabe as the area MP in a by-election.
The President was accompanied by the First Lady and Minister of Education and Sports, Hon. Janet Museveni who is the Ntungamo District NRM Chairperson and also former Ruhaama Constituency legislator.

“Looking at the development perspective, what is the religion of poverty? What is the religion of tribalism or being unpatriotic or fighting against women emancipation? I thank you for adhering to NRM method of work, for voting wisely for the new MP,” he added.
The President challenged parents to take time off their busy schedules and endeavor to guide the youth about the disadvantages of leading risky life styles.


The President used the occasion to announce a pledge of 400 corrugated roofing iron sheets and other building materials for Kahiija Primary School.
The president also received a spear, shield and stool from Ruhaama elders. They asked him to contest for the Presidency in 2023.


The First Lady thanked Ruhaama County electorate and NRM leaders for being open, transparent and for their overwhelming support to the NRM Party. She added that Ruhaama County should be nurtured as a model for development for others to learn from.


MP, Kahima Moses Mugabe said that plans are underway to build the Eriya Kategaya Memorial School, the construction of Maama Janet Museveni Girls’ School and the extension of electricity deeper into rural areas, among others.