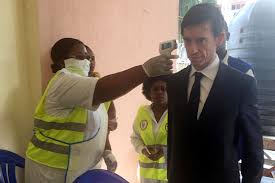 International Development Secretary Rory Stewart has called on other countries to urgently help deal with the ongoing, deadly Ebola outbreak DRC during a visit to the country.


The outbreak – the world’s second worst ever – has killed over 1,600 people in the North Kivu and Ituri provinces in eastern DRC, since it started in August last year.
During his visit, the Secretary of State talked to Ebola survivors and saw how current patients were receiving treatment in a UK aid funded clinic in Katwa, near the city of Butembo.

He also saw close contacts of Ebola patients receiving a vaccination, which funding from the Department for International Development has helped to develop.
More than 150,000 people in the DRC and neighbouring countries have so far received the vaccine during the current outbreak.


The International Development Secretary now wants other G7 members to step up to help meet the funding shortfall which the World Health Organization (WHO) and other partners face as they try to contain the disease.
The Secretary of State said during his visit to Butembo and Katwa on July 6


“We are on the edge with this crisis. We keep pulling it back from the brink but it is very dangerous. My visit to eastern DRC has only reinforced my view about just how urgent our response to this crisis must be. This is very, very real.’’
“We are essentially chasing Ebola – one of the world’s most deadly diseases – around an area overrun by armed groups. We are struggling to keep up with it.


“There is a real danger, that if we lose control of this outbreak, it could spread beyond DRC’s borders to the wider region and the wider world. Diseases like Ebola have no respect for borders and are a threat to us all.’’