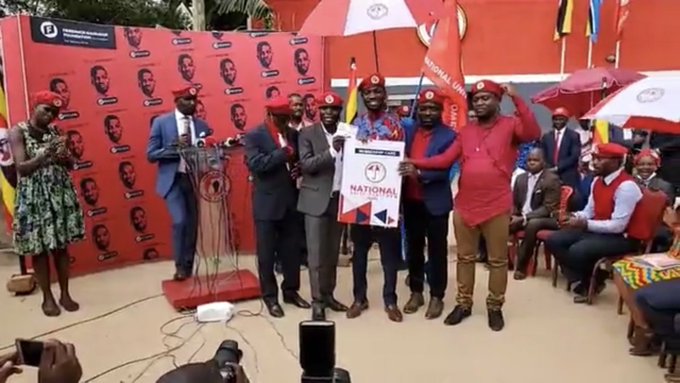 
Mayinja who was part of a team of artists and comedians who joined the party sought forgiveness and is now accepted as a member of the national unity party
“When I met the president, I asked him about the plans for the future of our country but he had no plans and as I tell you, let’s front Robert Kyagulanyi because President Museveni does not have the plans for the future of Uganda,” Mayinja said

“I want to apologize that I am really sorry for what happened but I thought that we are not enemies so I went on an investigation mission, and allow me reveal that our country is in total darkness,”
He added: I want to ask our colleagues in the NRM, to come and join us because I have been talking to them and I know what they are going through. I didn’t go to join them, I went to the President on a fact-finding mission. I wanted to know if he has a plan for this country. The truth is, we are on our own.


‘ ‘I know that many people were heart broken and I am really sorry but the main issue is that this country has no leadership. Let’s vote Kyagulanyi. Let everyone talk to at least one person and if you’re still undecided, settle, because you’re in the right place.I want to tell you that I am not here to pick a membership card to go and contest somewhere, no. I am not going to contest for any seat. However, I will give my support to anyone on the NUP ticket, if called upon’’ mayija said.
He sang ‘Bizzemu’ upon request from the attendees.


Asked whether he trusts everybody who is joining NUP, Kyagulanyi said that, “it’s not in our place to trust or de-trust the people who are joining us, we said and we shall continue saying that everyone shall be judged according to their actions.”