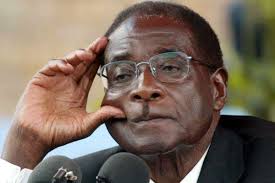 Last week, former Robert Mugabe deputy, Joice Mujuru Mujuru met Mugabe at his residence, where the former leader is holed up, where he lamented that people had deserted him.

“Now that he (Mugabe) is in this predicament, aaah, we were actually laughing, you know, I just said to him, ah, you know what, when you are in this situation, people desert (you), and he said yes, even relatives have deserted me,” she told Studio 7 in an interview.


Mugabe reportedly asked Mujuru to come and see him at his home in Borrowdale, a curious turn of events, considering how the veteran leader had brutally sacked her just under four years ago.
“He called me and I obliged, he was telling me what happened was wrong (firing her), he was misinformed,” she said.
Mujuru said Mugabe, who has not appeared in public since his resignation late last year, was in good spirits and appeared to be resting well.


“He was very happy, I think he’s resting, he’s doing fine, I was very happy to see him in that mood,” she said.
Mujuru said she did not think Mugabe was under house arrest, but only had his security detail as a former President.
“No, not house arrest as such,” she said.
“Of course, being a former President, he should have people, who guard him as soldiers, they could be soldiers and policemen all included, because that is how he used to move, even when he was still head of State.”


Mujuru said she believed Mugabe had been tricked into firing her by President Emmerson Mnangagwa, so he could clear the way to eventually succeeding the veteran leader.
“So, they knew what they wanted to do – they wanted me out of the way first, so that they would be able to get to Mugabe easily,” she said.


Mujuru and Mnangagwa were both fired in similar circumstances on accusations of plotting to unseat Mugabe.
After Mnangagwa was axed, the military intervened, leading to Mugabe’s resignation and the latter’s swearing-in as the President.
///NewsDay