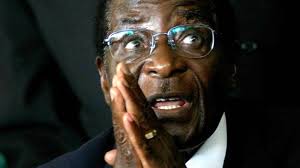 The former Zimbabwe president died in Singapore
It is believed he had been receiving treatment there since April. Mugabe had been battling ill-health and President Emmerson Mnangagwa told a Cabinet meeting two weeks ago that doctors had discontinued treatment.


Mugabe, ousted from power in a military coup in November 2017, was being treated in Singapore since April.
Mugabe had led Zimbabwe in 1980 and again in 2017, before ultimately being booted after a military coup.

Nearly four decades after the country’s independence from Britain in 1980, he was regarded by many as a tyrant, willing to unleash death squads, rig elections and trash the economy in the relentless pursuit of power.

Cde Mugabe was an icon of liberation, a pan-Africanist who dedicated his life to the emancipation and empowerment of his people. His contribution to the history of our nation and continent will never be forgotten. May his soul rest in eternal peace (2/2)