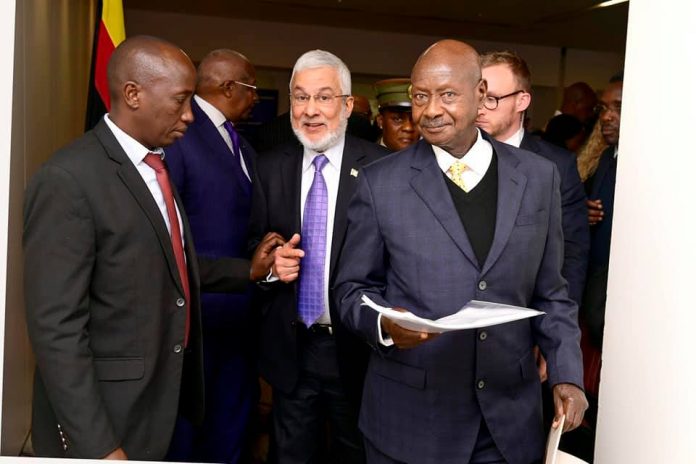 At the Double Tree Hilton Hotel in London, President Museveni addressed the UK-Uganda Business Forum, graced by chief executives of over 70 British companies, where he made the case for them to come and invest in Uganda.


The head of state pointed them to the immense opportunities available in agriculture, mining, tourism, and the services sectors. ‘’Serious investors in these areas can be assured of adequate raw materials and other government support. Our infrastructure is now good.’’ He said.

He added: The roads are smooth from border to border, we are working to bring the cost of each unit of electricity down to 5 cents, while we pursue the construction of the railway, both to Mombasa and Dar es Salaam.
Mr Museveni also congratulated UK Prime Minister Johnson Johnson for his recent victory.
On his recent emphatic victory, Mr Johnson said, “I had to go to the Bush like you to win. I had to go deep to the countryside to get this victory.”


The Prime Minister also pitched for Uganda to join Britain’s fight against climate change.
President Museveni informed his host that Uganda was already tackling issues like wetland misuse and urging people to leave the natural habitats.


On the subject of ethical business practices, President Museveni said Uganda was fighting corruption among government workers and told the Prime Minister to urge investors to report and public servants who seek bribes from them
President Museveni recently explained that some of the appointments and changes he made in cabinet reshuffle were brought about by reports of corruption in some government ministries and departments.


The President further explained that he had not made many changes in Cabinet because he was mindful of the need to have stability in many of the government Ministries on account of the on-going government works.

read: Museveni explains why he did not fire some ministers in the recent reshuffle