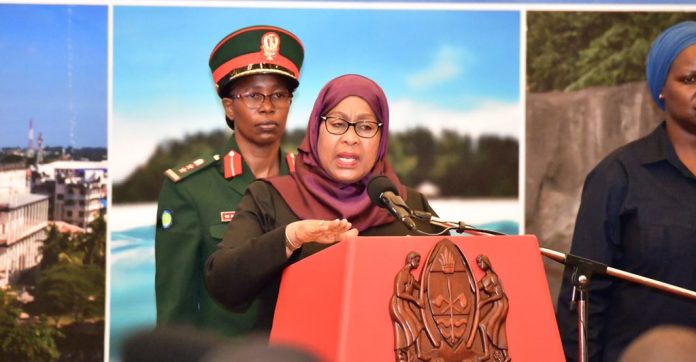 Tanzania’s new President Samia Suluhu Hassan marked a difference with her predecessor on Tuesday by saying her government would form a committee for scientific research into COVID-19.
Recently-deceased former President John Magufuli had dismissed the threat from the coronavirus pandemic, saying God and steam remedies would protect Tanzanians.


At a swearing in ceremony for ministers, she announced plans for an expert task force to advise government on anti-coronavirus measures.

“On the issue of Covid-19, I think, I should form a Committee of experts to look at it professionally and then advise the Government, it should not be silenced or rejected or accepted without professional research,” she said.

She added: We cannot isolate ourselves as if we are an Island but also we cannot accept everything brought to us, we cannot continue just reading about Covid 19 Worldwide, yet Tanzania is all blank, it is incomprehensible

The president also hinted at major potential changes in the country’s foreign policy – directing the new foreign affairs minister, Liberata Mulamula, to set about mending international relations and saying “no country can walk alone. Cooperation is the only way”.


Media ban reversed
The president also announced that bans slapped on a number of media outlets by her predecessor who died last month are now to be lifted.
“I understand that there are media organisations that have been closed – let them open and ensure they follow the law,” President Samia instructed Information ministry


She said media rules, regulations and penalties should be transparent, so that everyone knows what to expect should they do wrong – and so that the punishment is proportionate.
Speaking during the swearing in of new ministers and permanent secretaries, President Samia said government must not be seen to curtail media freedoms.
She said by lifting the bans on some media outlets, the world will no longer regard Tanzania as a country that launches unnecessary attacks on press freedom.
she also directed all regional governments to allow freedom of expression that will allow the public to express their grievances without being intimidated.
“We will deal accordingly with anyone who prevents the people from expressing their views on challenges they are facing if it comes to my attention that they are prevented from airing them out,’” she said.

in 2017, the late magufuli government banned four newspapers for what they termed as “dissemination of false information” and “threatening national security.”

Mawio Newspaper was banned after publishing an article that linked former presidents to controversial mining contracts while Tanzania Daima was banned for what authorities termed as “continuous publication of false information” after reporting.

Mwanahalisi was banned for two years after it published an article that compared Dr Magufuli with opposition politician, Tundu Lissu while Raia Mwema was banned following the publication of an article titled “Magufuli presidency likely to fail.”