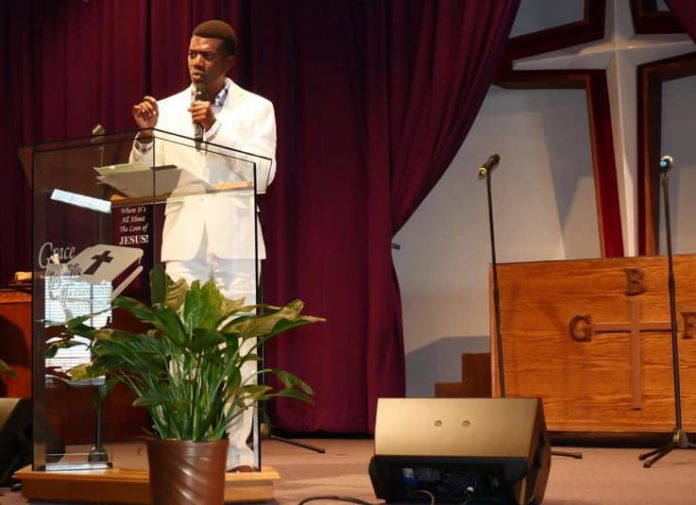 Nigerian human right activist, pastor and lawyer says that the majority of those who are so religious and visit the church occasionally are doing that because they are poor.
‘’Poverty is why many people are religious and churchy. ‘’ he posted on social media
He is also the pastor of the Mind of Christ Christian Center in California and Abuja


He adds: To know the difference between churchgoers who loves God and churchgoers who are just after solutions to their problems, go home and ask their neighbours how they treat other people. How we treat others is a better judge of true Christianity than church attendance
The spokesman to the former president of Nigeria, Dr Goodluck Johnathan says ‘’Religion is a reaction to poverty. Faith is a more reliable judge of Godliness’’
In another post, Omokri best known for his intelligent write-ups stated that overcrowded and underdeveloped places make people believe their prayers do not get answered.
“Poverty is why many people are religious and churchy. When these same people relocate abroad and see that their prayer requests are easily met in their new locations, they lose their religiosity.

“Religion is a reaction to poverty. Faith is a more reliable judge of Godliness. That is why after salvation, Christ taught more about wealth. Because without wealth, your spiritual health is at risk.
Poverty alters your perspective. You make enemies out of innocent people.
“You blame ancestral curses and village people for your poverty, when in fact the problem is your location, which is overpopulated and underfunded.
“And fear of enemies, rather than love for God drives you to church.”
Omokri is the author of a multimedia design, Build Up Nigeria, and has created a series of short films in the U.S. Omokri continues to write articles for major newspapers mainly political OpEd and Christian material.

Omokri is the founder of the Free Leah Sharibu movement, which is a media campaign advocating for the freedom of Leah Sharibu, a Christian girl who was kidnapped by the radical Islamic sect, Boko Haram.
On February 19, 2018. Boko Haram offered to release Sharibu if she would convert to Islam, but she refused to renounce her Christian faith.
Omokri has raised over £4000 for Miss Sharibu’s parents through the clothing line and book by former British Foreign Secretary, Boris Johnson MP.


Reno Omokri successfully supported a campaign to unfollow Nigeria’s president, Muhammad Buhari on Twitter. His campaign #UnfollowBuhari led to a 100,000 drop in the Nigerian President’s Twitter following in just 3 hours
Omokri led a series of protests, On April 2, 2021, in London to force General Buhari to return to Nigeria, instead of relying on the UK for healthcare. Mr Buhari had flown into London the previous day.

read: Pastors or Traders in the temple of the Lord?