Home Lifestyle Pope Francis: “will have to visit” South Sudan next year 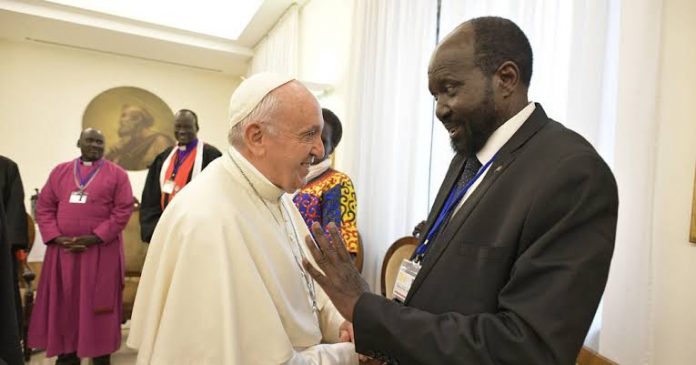 Speaking at his weekly blessing in St. Peter’s Square, Pope Francis said he “will have to visit” South Sudan next year. The Pope didn’t detail his travel plans to South Sudan


He urged the leaders of South Sudan to overcome their divisions and to find consensus for the good of the country.
Referring to the civil war in his lengthy appeal on Sunday, Francis said the people of South Sudan had “suffered too much in recent years… and waiting for the definitive end of conflicts and lasting peace”.

A trip by Francis to South Sudan, had been tentatively scheduled for 2017 but had to be canceled because of political instability and poor security.
South Sudan declared independence from Sudan in 2011 but has been crippled by conflict ever since.
President Salva Kiir and former rebel leader Riek Machar signed a peace deal in September 2018.
However, on Thursday the two leaders agreed to delay forming a unity government until February next year.


There are fears the breakdown of the deal could lead to the return of large-scale violence in the predominantly Christian country, our correspondent adds.
Last April, a month before the original deadline, the pope brought South Sudanese President Salva Kiir, opposition leader Riek Machar and other politicians to the Vatican for a retreat.He knelt to kiss their feet as he urged them not to return to civil war.