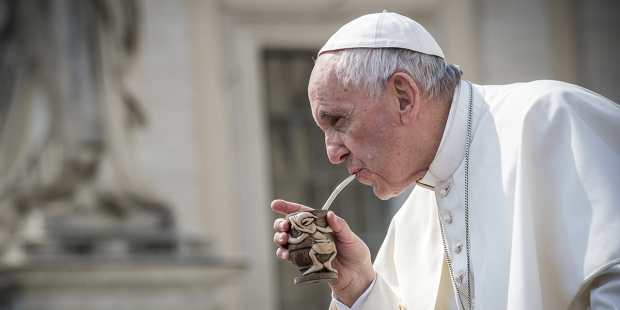 Pope Francis said Tuesday that the Vatican commission exploring the possibility of female deacons continues its study, but does not have any consensus that would lead soon to a plan of action.


“For the female diaconate, there is a way to imagine it with a different view from the male diaconate,” Pope Francis said May 7 during an in-flight press conference returning from North Macedonia and Bulgaria.
“Fundamentally, there is no certainty that it was an ordination with the same form, in the same purpose as male ordination. Some say there is doubt, let’s go ahead and study,” the pope said.
The diaconate, as part of the Church’s sacrament of Holy Orders, is currently only open to men. Pope Francis appointed a commission in 2016 to examine the possibility of women serving in some diaconal role, with or without the sacrament of ordination.


During the in-flight press conference, Pope Francis revealed that some in the Vatican commission have concluded that historically the female diaconate was different from the role of male deacons, namely without sacramental ordination.
“For example, the formulas of female deacon ‘ordination’ found until now, according to the commission, are not the same for the ordination of a male deacon and are more similar to what today would be the abbatial blessing of an abbess,” he said.
Pope Francis said that others in the commission hold that there was “a female deacon formula,” but it is not clear whether it was a sacramental ordination or not.

The pope went on to explain that in the past female deacons assisted with the liturgy, for example, with the full-immersion baptisms of women or to serve as an aid to the bishop in determining the authenticity of domestic abuse with matrimonial disputes.
Archbishop Luis Ladaria, Prefect of the Congregation for the Doctrine of the Faith, was appointed president of the study commission on the project, consisting of 12 members – 6 men and 6 women.
These comments by Pope Francis’ on female deacons are very similar as to what he said in 2016 on the subject.


A 2002 document published by the International Theological Commission concluded that female deacons in the early Church had not been equivalent to male deacons, and had “no liturgical function,” nor a sacramental one. It also maintained that even in the fourth century “the way of life of deaconesses was very similar to that of nuns.”
/// catholicnews