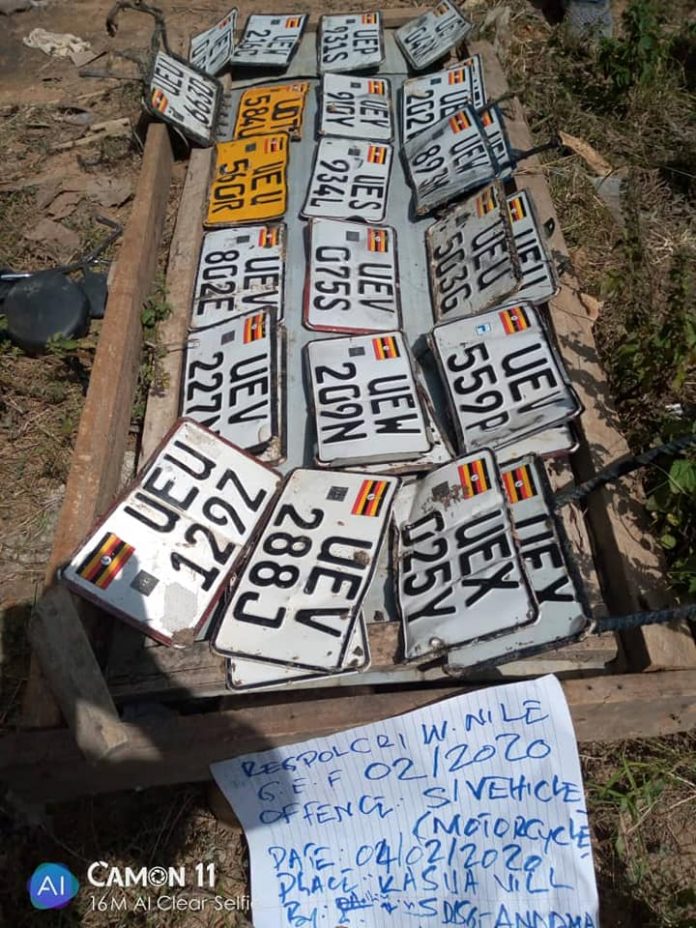 The operation aimed at getting rid of the common motorcycle thieves and robbers. The 42 number plates are suspected to be for stolen motorcycles.
It all started with a call from a complainant at Dokolo police station, Dokolo District on 31st/01/2020 to office of Flying Squad Unit, Arua following his stolen motorcycle reg. number UEZ 231M which had a tracking device.


It has also been common that Motorcycles stolen from Central North are found in West Nile region and vice vasa. Accordingly, the officers responded quickly and recovered 7 suspected stolen motorcycles in total, in the same household but in separate rooms in Kasua village, Pokea parish, Pajulu Sub county, Arua district.
14 pairs of motorcycle number plates and other dismantled spare parts were also recovered in the same house.


A One Eriku Ronald 25yrs old, resident of the same home wasn’t at home by the time of the operation as he was on the run.
West Nile GEF 02/2020 was opened to investigate the matter. On 04th/02/2020, teams of officers from Arua CPS, Regional Fire Department, ISO headed by Flying Squad Unit went back to the scene at Kasua village to continue with the operation where they recovered 20 more number plates of Motorcycles inside the pit.


On 05th/02/2020 at around Arua Airfield area, 8 more number plates of suspected stolen MCs were recovered in a house. Some suspects were arrested to assist police with investigations as others are still being traced.
All recovered items are exhibited at Arua Police Station and those who lost their motorcycles are urged to identify their motorcycles and number plates at Arua CPS so that they can be traced. Operations will continue until when the prime suspects will be netted and brought to law book. Of recent a number of incidences of robbing motorcycles and even murdering their riders have been registered in the region.