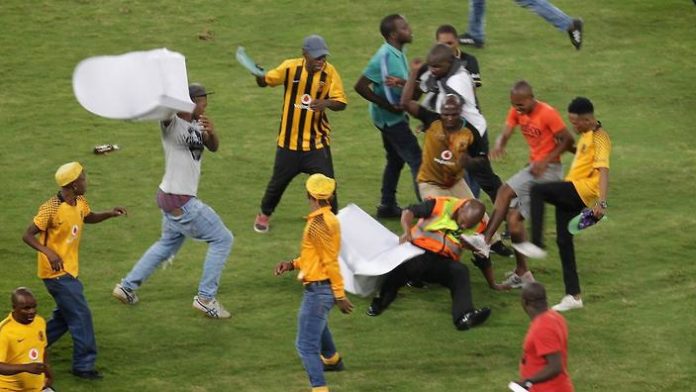 Police were partly to blame for a violent pitch invasion at a South African soccer match, where fans were caught on camera beating up security officials and destroying broadcast equipment, the country’s soccer boss said on Monday.


Hundreds of angry fans on Saturday evening leapt the perimeter fencing and went on a rampage at the Moses Mabhida stadium in Durban, after the Kaizer Chiefs lost 2-0 to the Free State Stars in a semi-final cup match.
One security officer was hospitalised but was later discharged. Television footage showed him being repeatedly kicked in the chest and beaten with a plastic chair by rioting fans.

Fan violence at soccer matches has a history in South Africa. Forty-three people died and 158 were hurt in a stampede during a match between Chiefs and the Orlando Pirates in 2001.
A commission of inquiry called by then President Thabo Mbeki blamed inadequate training for stewards and lack of coordination between police and stadium management. It found no criminal or civil liability against the clubs, the league or stadium management.


Before Saturday’s match, police officials didn’t show up for a planning meeting on security, Premier Soccer League Chairman Irvin Khoza told a televised news conference in Johannesburg.
“You can’t implement what you don’t have plans for,” Khoza said.


Khoza said an investigation by the League’s disciplinary structure was underway.
The causes of the riot will be investigated, police spokesman Jay Naicker said.
“We will be probing if the deployments of SAPS, Security Personnel and other security agencies were in place according to the plan, and whether those that were deployed to provide security event reacted as they were expected to,” Naicker said.


One arrest had made and that others would follow, he said.
“From the league’s perspective, whilst crimes or unlawful acts of public violence are being committed in their presence, the South African Police Service is required to be properly prepared and to immediately act,” Khoza said.
On Sunday, the minister of sports, Tokozile Xasa, called for answers and swift action by the league.