Home Politics “Police had been infiltrated by A BEAN WEEVIL that has now been... 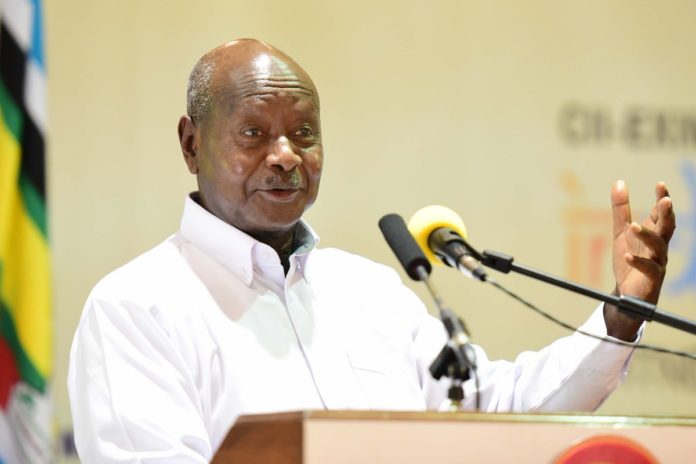 President Museveni has assured Ugandans that the criminals that had infiltrated the Police will now be removed after the ‘bean Weevil’ was removed.
‘‘Those criminals can be arrested only that Police had been infiltrated by a “bean weevil” that was now removed, we shall now get them’’ the president said.


The president made the remarks while Speaking at the Women’s Day event held in Mityana’ he said that the rampant murders of women in Entebbe, Nansana and family attacks in the Greater Masaka region, was because police had been “infested by weevils.”
“Some of these killers were being arrested, but our police was starting to get infested by weevils. We had a weakness in the Police. There were weevils there,” the president said without naming ‘bean weevils’

The president did not have kind words for Uganda Prisons from whose custody, two murder suspects escaped recently during a court session in Masaka.
Museveni, wondered why the officers un-cuffed the prisoners and did nothing when they escaped.
Musa Galiwango and Muhammad Kidawalime; two of the persons arrested in the recent wave murders and robberies that paralyzed greater Masaka escaped, taking advantage of a security lapse at the Masaka High Court were they had been brought for prosecution. The suspect standing in the dock jumped over it, landed just next to the court clerk’s table causing confusion into the fully-packed court room and suddenly fled through the main door.


The second suspect also took advantage of the ensuing confusion flying over the court fence and ran toward an estate opposite to court and eventually entered a nearby forest.

read: Kayihura to Museveni: Its us in govt who have failed you, promises total loyalty

“Apparently the criminals get un-cuffed when they are in court, because courts are for people in suits. I don’t know where these rules come from. I was never consulted about them,” he said.


read:Kayihura: Police rotten at the bottom ‘‘me am clean’’, vows to build Police afresh

“These are two men who killed five people. I personally went to Bukomansimbi, and participated in their arrest and we got them all. And here you have four Prison guards, and the judges are sitting there with their wigs, and the guards are there dozing, and the killers are not cuffed!”