Home Politics Pierre Nkurunziza laid to rest: All mourners were asked to dress in... 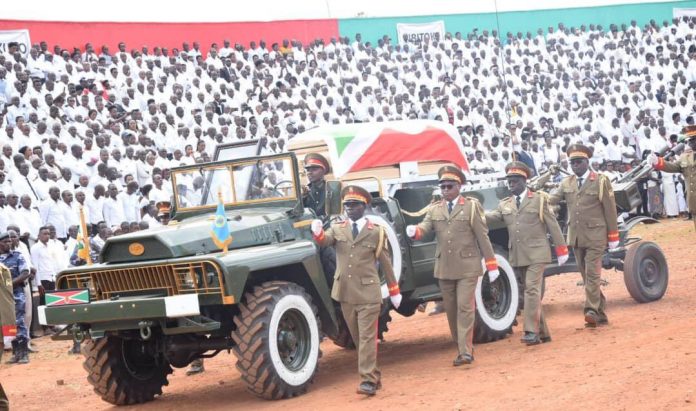 Burundi’s late President Pierre Nkurunziza – who ruled for nearly 15 years – was on Friday buried in the capital, Gitega.

Thousands of Burundians lined the road as the body of Nkurunziza was escorted under heavy security for a state funeral.

There was screams and tears heard in the Ingoma stadium as the funeral car passed.

“Bye-Bye papa”, said mourners, all dressed in white at the request of authorities


Burundi’s government urged the public to line the streets in a show of respect as the hearse carrying the late leader travelled from Karusi hospital where he died, to Gitega stadium, for the last honours.

The new president Ndayishimiye asked anyone who passed the grave of the late Nkurunziza to bow, whether or not on foot.

The funeral ceremonies began with an “homage by his wife, Denise Bucumi Nkurunziza, his children and those close to him” in an intimate gathering at the hospital in the central city of Karuzi where he died on June 8
He was buried at a monument recently built in Gitega at the site of another structure which was to be dedicated to victims of the country’s various crises over the years.

Meanwhile, dozens of guests passed out and were evacuated in Red Cross vehicles.
Nkurunziza, who some accused of overseeing “a brutal regime”, spent most of his last years in office preaching more than he engaged in politics. On several occasions, he would repeat that “God was given the first place in Burundi”, but would also remind what he called “enemies of Burundi” of God’s “iron fist”.


Ndayishimiye said he believed that he has just lost “a great advisor”. “You are leaving me a great burden to develop the country,” he said.