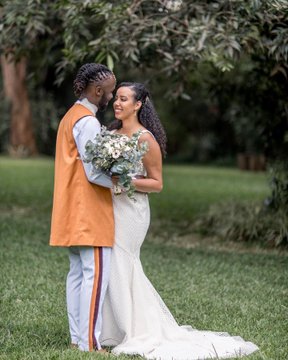 Junior Nyong’o will now be referred to as Mr. Wanja after taking up his wife’s name.

Junior Nyongo tied the note with his long time fiance’ Wanja Wahoro. The couple announced the great news on Instagram and shared some photos with their followers celebrating their big day.

The artistic actor said “I Do” to his queen Wanja Wahoro in an intimate ceremony after being engaged for a couple of months.

@wanjawohoro, I will walk for miles to water your roots every single day until you are too tall and impossible for anyone to ignore. My strong steadfast Acacia. Ineffable in stature and beauty. The shade of your branches will always be my refuge. 📸 : @mwanikiweddings 👔 : @houseoftayo

The socialite promised Wanja a forever she would never regret and referred to the beauty as his strong and steadfast acacia. “I will walk for miles to water your roots every single day until you are too tall and impossible for anyone to ignore,” Junior wrote. Wanja noted that was not the wedding they had initially planned for but at the end of the day, it was faultless.