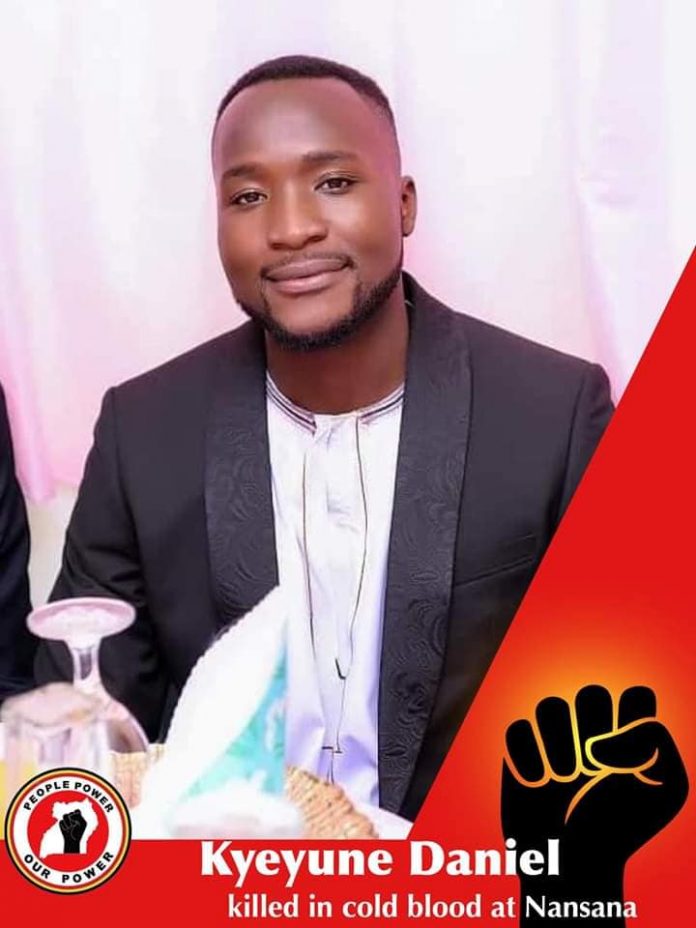 New details indicate that the Nansana shooting victim identified as Dan Kyeyune was a son of one of their own, David Kabuye, attached to Kasubi Police Station-according to Kampala Metropolitan police spokesperson


Kyeyune, whom People Power pressure claim to be their member, was shot dead as police, working with Local Defence Unit personnel, were trying to disperse a crowd that had gathered to cheer a convoy of Mr Kyagulanyi. The incident happened at about 8pm in Nansana, at Masitowa Stage on Kampala-Hoima road.
Police statement regarding Nansana shooting

Yesterday, 25/02/2020, at around 7:30pm, the Joint Security Patrol team at Nansana Municipality, in Wakiso district, was confronted by a violent procession that disrupted traffic flow and business around Masitowa area in Nansana for almost two hours. The rowdy crowd was joined by another group from Nansana that disrupted traffic flow along the highway; those armed with sticks started beating bystanders and other road users.


Although the police gave several commands to the violent crowd, on motorcycles, motor vehicles, and on foot to disperse; they absolutely disregarded our instructions, and aggressively approached the joint team of patrollers, others dangerously pelting stones at them. The team used several crowd dispersal methods that included the use of batons, teargas and bullets.
In the heat of the moment, the body of a male adult, allegedly shot dead by unknown persons, was found near Bank of Africa, Nansana Branch. The patrollers, retrieved the body of the victim amidst hostilities and transported it to City Mulago for post mortem analysis. The deceased has been identified as Dan Kyeyune, a resident of Nakulabye.


The IGP has reached out to the family and also expressed his heartfelt condolence to his father, Kabuye David who is a police officer attached to Kasubi Police Station, the immediate family of the deceased, all friends and relatives. Police has taken care of the burial expenses. May the soul of Dan Kyeyine, rest in Eternal Peace.


He further instructed the Directorate of Criminal Investigations to thoroughly investigate the shooting incident. A task team has already reconstructed the scene and is reviewing among other things recordings from the CCTV cameras, 999, dispatch and accounts from witnesses. They have recovered three spent cartridges, a stone, one left sandal from the scene and close to the body. All the patrollers on duty last night, are being interviewed and their weapons, exhibited for further forensic analysis.