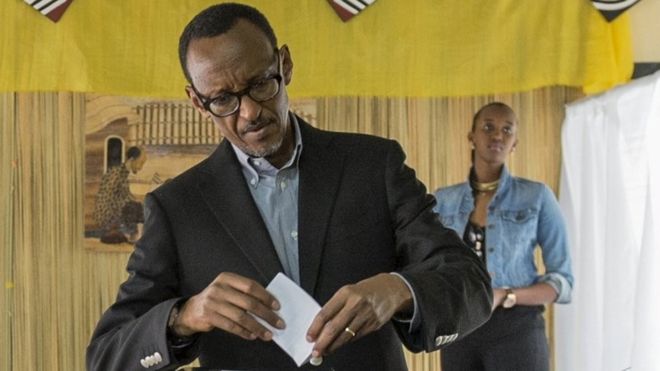 The electoral commission in Rwanda has announced that President Paul Kagame has won a third term in office with a landslide.
Kagame has won international plaudits for presiding over a peaceful and rapid economic recovery in the Central African nation since the 1994 genocide, when an estimated 800,000 people Tutsis and moderate Hutus were killed.
But he has also faced mounting censure for what critics and rights groups say are widespread human rights abuses, a muzzling of independent media and suppression of political opposition.

They say that he has brought stability and economic development after the horrors of the 1994 genocide.
But his critics – most of whom are outside the country – say he has ruled through fear.
Mr Kagame, who has been in power for 17 years, was challenged by Frank Habineza and Philippe Mpayimana.


He came to power in 1994, when his rebel group took control of the capital, Kigali, ending the genocide in which some 800,000 ethnic Tutsis and moderate Hutus were slaughtered.
Rwanda’s constitution was amended in 2015, giving Mr Kagame a chance to stay in power until 2034.
The two challengers have complained that their supporters are being intimidated, which they say explains the low turnout at their pre-election rallies.


The candidates have also accused some local authorities of undermining their campaign.
The ruling party denies any accusations of wrongdoing.
Under Kagame’s rule, some dissidents were killed after they fled abroad, in cases that remain unsolved. The government denies any involvement and the cases appear to have done little to blunt Kagame’s domestic standing among Rwandans.


“Even if I am poor, I voted for Kagame for restoring peace and security,” said 45-year-old farmer Appolinaire Karangwa, who cast his ballot in the capital Kigali told Reuters


Habineza, Kagame’s main opponent, voted early on Friday at Kimironko, a polling station in the capital.
He told reporters that his campaign had been hobbled because it could not compete with the machinery of the state.
“All state structures belong to his party. It is not very easy but we are also strong,” he said.