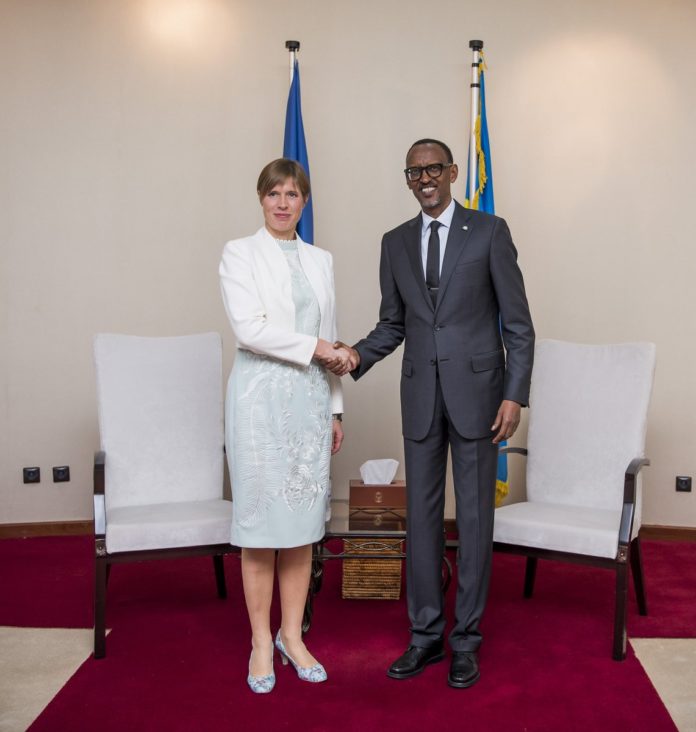 Estonian President Kersti Kaljulaid is in Rwanda on a two-day working visit, the second leg of her African tour, which kicked off in Ethiopia.
President Kersti Kaljulaid, who landed in Kigali yesterday, was last evening hosted by President Paul Kagame for a dinner at Urugwiro Village. The two leaders discussed various areas of cooperation including strengthening bilateral ties and digital societies.


Prior to her meeting with President Kagame, the Estonian President laid a wreath and paid respect to the victims of the 1994 Genocide against the Tutsi at the Kigali Genocide Memorial – Gisozi.
“On behalf of all Estonian people, I offer our condolences to the people of Rwanda, to the survivors and the families of the victims of the Genocide against the Tutsi. Unfortunately, our world is no better today and while physical wounds may heal, the hearts remain broken. I commend Rwandans for their efforts to overcome this terrible period as one, and become a unified community against violence,” President Kersti Kaljulaid wrote after touring the Memorial.

This is the first-ever visit of the President of Estonia to Africa. Since July, Estonia holds the presidency of the Council of the European Union – the tenure lasts for six months.
Located in Northern Europe, Estonia is a very tech-savvy country with one of the highest adult literacy in the world – 99.8 per cent, according to UNESCO.


Estonia is famed for its e-Health system and e-Prescription benefits. In 2013, 95 per cent of all prescriptions in the country were being issues electronically.
Estonia was the first country in the world to adopt online voting in 2005.
Estonia is among the cleanest places on the planet and the least populous state of the European Union with a population of 1.3 million people.