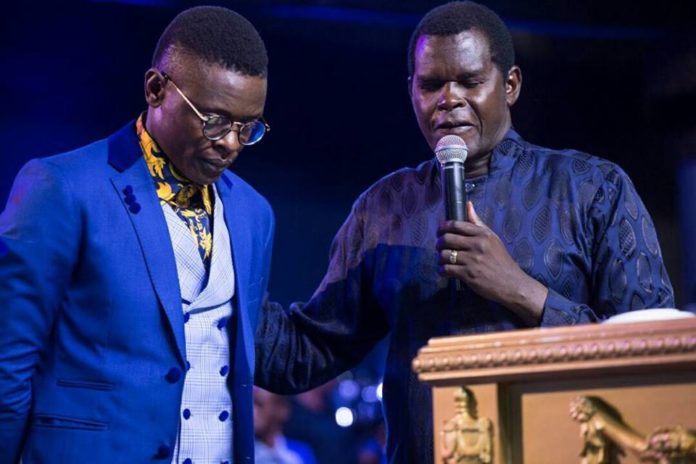 ‘‘Recently, I met Joseph Mayanja, also known as Jose Chameleone at Kenya Airways Lounge in Nairobi. I was returning from Ghana and He was going to Ghana. Chameleone asked me to pray for him.’’ Pastor Robert Kayanja told his followers at Miracle Centre Cathedral, as the smartly dressed singer looked on.
The once East Africa’s number one musician had gone to Pastor Kayanja’s church to seek blessings.
Jose Chameloene has had a troubled life for the last three years- was accused of murdering Karamagi, fading music career, troubled marriage and financial troubles.


A few weeks ago, wife Daniela Atim filed for divorce, claiming her husband is abusive and not responsible.
‘ ‘ I am praying for you [ Jose Chameleone], your family and your business. God cover him and his family. God Break all the witchcraft, and demons.’’ Pastor Kayanja prayed as the jubilant followers and Jose Chameloene looked on. The event was covered live on Channel 44.
Some musicians [ including Qute Kaye] have in the past accused Chameleone of bewitching them. The singer was at one accused of being part of the Illuminati family- he has denied all these claims.

Chameloene told the congregation that Pastor Kayanja is a long-time friend. And that he has always invited him to come his music shows to bless them, without much success. ‘‘that’s why I decided to come and get the
blessing by myself’’ Chameolene told Kayanja’s followers.
The musician told the congregation that he is a devout Christian.
‘ ‘ Those who read the Bible, know what my name [ Joseph] means. I am a devout Christian, I wouldn’t be what I am today, if it was not for God. Every day, I make my children kneel down and pray to God’’ revealed Jose Chameloene as Pastor Kayanja looked on.


This is not the first time; the celebrated singer is accepting Jesus as his savior.
In June 2009, Jose Chameleon and wife Daniella got saved. The two accepted Jesus after Kenyan evangelist Annabelle Renno preached and prayed for them at Kololo Hospital, where Chameleone was admitted after fight with businessman Meddie Sentongo in Kampala.
Annabelle entered Chameleone’s hospital room without the musicianâ’s knowledge and by the time she left, the musician was singing Alleluiah.

Asked whether they were willing to give their lives to Christ, Chameleone and his wife said yes. The preacher led them in a one-on-one prayer confession, in which the couple vowed to turn away from sins they had committed in the past and pledged to denounce satanic practices.

READ: Who is Pastor Aloysius Bujingo?