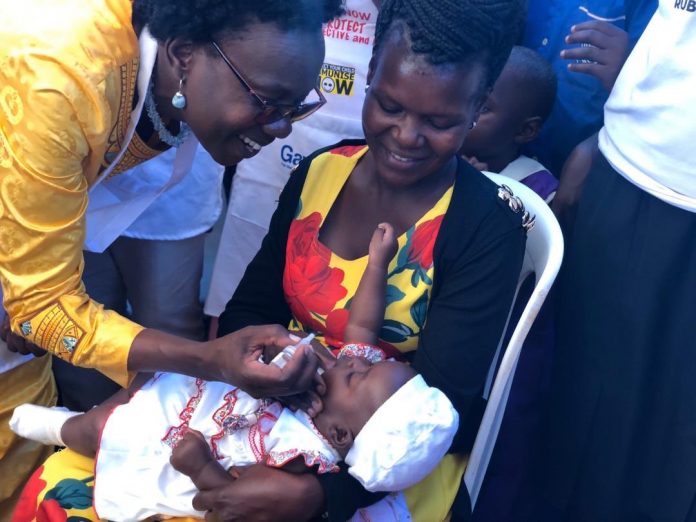 Uganda is set to immunize over 18 million children against Measles and Rubella which is 43% of the entire country’s population.
Also Included in these are 8.2 million children aged below nine months, that is, 20.5% of the population that will receive the Oral Polio Vaccine.


In the recent past, the country has experienced Measles and Rubella outbreaks in over 60 districts. At the same time, Polio remains a big threat given evidence of wild and vaccine-derived strains circulating in neighbouring Democratic Republic of Congo and South Sudan.

Therefore, the 18 million dollar immunization campaign funded by the Government of Uganda, Global Alliance for Vaccines (GAVI), World Health Organization (WHO) and United Nations Children’s Fund (UNICEF) is intended to tackle such public health challenges.
The campaign will take place from Wednesday 16th October to Sunday 20th October, 2019. This immunization exercise that will be conducted in schools for the first three days and in the communities for the last two targets all children under 15 years of age whether previously immunized or not in order to interrupt circulation of these diseases.


At the same time, the campaign will be the launching pad to introduce the Measles-Rubella vaccines into the routine immunization schedule of the country.
This campaign also provides an opportunity to intensify sensitization of communities on Measles, Rubella and Polio, surveillance as well as identify and investigate any unreported suspected cases of these diseases.


“This campaign does NOT replace the routine immunization schedule. Parents, caretakers and all concerned must ensure that all children receive and complete all the vaccines specified in our immunization schedule after the campaign,” said Dr Jane Ruth Aceng, the Minister of Health.


“WHO approved the vaccines to be used and they are safe, free and effective,” said Dr Yonas Tegegn Woldermariam the WHO country representative.