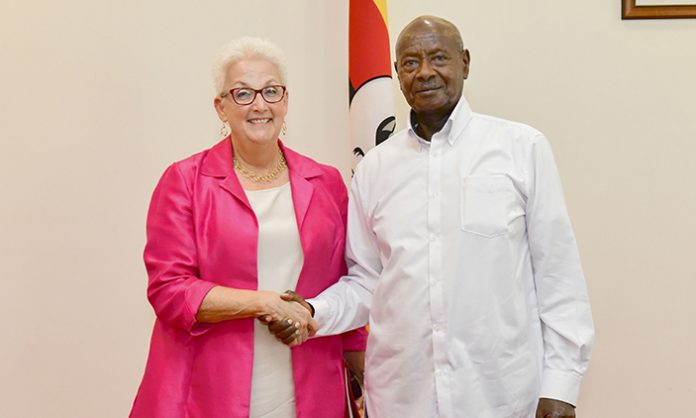 US Ambassador to Uganda Deborah Malac on Thursday paid a courtesy call to President Yoweri Museveni as she marks the end of her tour of duty to Uganda.
Malac presented her credentials to President Museveni in February 2016.


‘‘After 39 years in diplomatic service alone for the United States of America, Ambassador Deborah Malac tells me she will be ending her duty here in a few days. ‘’ President Museveni tweeted on Thursday
The President wished her luck in her next move.
Ambassador Malac said that she enjoyed her stay in Uganda and called for further strengthening of the bonds of bilateral cooperation between Uganda and the United States of America.

Malac revealed that she is retiring to private work in America following 39 years of service as her country’s envoy in a number of countries including Cameroon, South Africa, Senegal, Liberia, Ethiopia and Uganda.
She will return to Africa focusing on issues of investment for development particularly in Uganda because of the country’s conducive climate, plenty of sunshine and the good political environment.


Malac will be replaced by Natalie E. Brown, the Chief of Mission at the US Embassy in Eritrea
Malac leaves amid accusation she was interfering in Uganda’s internal affairs. Last year, former Ethics Minister James Nsaba Buturo warned the US diplomat against what he called overstepping her mandate by regularly commenting on issues of the host nation.
However, Malac has had an outstanding role in Uganda, specifically advocating for freedom of speech, democracy and respect of human rights among others.


While being vetted for the posting to Uganda by the senate foreign relations committee, Malac told the committee that if she was confirmed, she will urge the Ugandan president to ensure the political space necessary for a spirited and robust campaign in which all parties participate fairly as the country was heading to elections.


In April 2016 while speaking at the post-election symposium on Youth, Democracy and Governance at Hotel Africana in Kampala, Malac called on the Ugandan government not to sacrifice the rights of its citizens in the name of maintaining stability.


While speaking in July 2017 at America’s 241st Independence anniversary celebrations at the US Embassy in Kampala, Malac said that strong institutions, not one person or party, is the secret to longevity and stability of nations.
She has also been a strong advocate for better health for Ugandans and at the center of the President’s Emergency Plan for AIDS Relief (PEPFAR), which is a US government response to the global HIV/Aids epidemic.